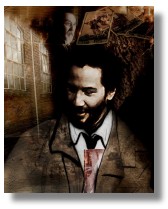 When it was first announced that Keanu was going to be playing the title role in Constantine, based on the Hellblazer comic series, I went and eBay'ed a few issues to get a feel for the character. At first I hated the idea, then as I got to know about this "right bastard" a little bit more, I got a little excited over the thought of Keanu being able to stretch his bastard muscle a little bit. Donnie Barksdale was a good tease, but a whole movie of Reeves bein' all rogue-ish and onery? Bring it.

But it seems that the Hollywood machine is doing some pretty drastic things to this property.
Thanks to M.C. for this link to the Hellblazer site, insanerantings.com, that is a grudgingly good source of info on the project, including some pre-production concept drawings.


Current plot overview : John Constantine, an American magus recently diagnosed as having brain cancer, teams with Detective Sergeant Angela Murdoch in the hunt for a serial killer who preys on psychics and magicians.

Even I can see why the fans of the comic are not too happy. And all I did was buy a few odd issues of the comic.

-From a poster called "Funk" at the insanerantings forum:


[...]"They buy up the Hellblazer franchise and move the action to America. Not such a big change really, given that John spends much of the comic book series abroad.

Then other small changes occur over a long period of time:

*He's given a female cop sidekick. Not so bad. After all, she's part of the plot.
*He can now drive. Hey, that wasn't such a big part of his character.
*He becomes an American. Big change, but it's not like his attitude or personality is too badly affected.
*They pick a dark haired, part-Hawaiian actor to play him. Looks aren't everything though right?
*He gets brain cancer instead of lung cancer. Ah, we can live with that.
*He no longer smokes. Who's going to miss a little thing like that?
*He's described as "innocent" rather than "a bastard" which seems odd, but it's not like they've changed everything else about him have they...?

So at the end of a series of very small changes you end up with... well. TED CONSTANTINE.

Of course, when you're close to the project and have no idea of the original source material these changes don't seem so serious, especially when they're being made over such a great deal of time. I doubt that they thought "let's use this franchise and completely change everything about it".

Oh, and note the car in those drawings mentioned above. Hellblazer's John Constantine can't drive.

And there's more in depth discussion if you want to check it out.

FYI, The movie should be out next summer, and according to this article starts shooting September 15 in Los Angeles.

One happy byproduct of my curiousity of the Hellblazer Series is that I discovered Warren Ellis' blog (and that in turn led me to William Gibson's, as well).

Anyway, luckily I am a Keanu fan more than a comic fan, so I can probably enjoy this movie. It's actually sort of a relief, knowing they changed it so much that it won't be him that gets blamed if it's crap. However, I'm not nearly as creamy about this interpretation of the magus.

Plus, I am a little sad that he won't be going blonde.

For what it's worth, I think it would have been much better to cast Keanu as Preacher.
http://www.sacredcow.com/hicks/preacher/

I wonder why they changed some of the things they did - seems most of them are unnecessary changes IMO. The lung cancer and smoking - he already smokes, so why not leave that in? And the driving - why can't he be someone who doesn't drive? In NYC there are a lot of people who can't (or don't) drive. Making him an American and dark haired had the comic book geeks in enough of an uproar - making more drastic changes seems to be tempting fate. Why piss off your target audience from the get-go?

Of course I'll see it multiple times, but those guys who would go because of their love of the comic book character may not go at all. I guess we'll just have to trust Reeves' judgement that this is a strong character and a good script that will make everybody happy in the end. I'm looking forward to his badass 'tude, too.

like i've said from the start, it's just a bad idea. i mean, look what the wrong guy (Ben Affleck) did to Daredevil. if it's a comic, it ought to follow the basic program. keanu could probably find another "right bastard" to play, couldn't he? tempting fate, indeed. (but of course, i'll see it over and over again...)

I'm telling you,...PREACHER.
He should be playing Preacher instead of the guy that is (can't remember his name, was in X-Men).

oh hell yeah, just visited the Preacher link. you are SO right about that one, krix!

Maybe someone will hear...;)

And yeah - I can teach you some English profanity!

Fuckin' A he should play preacher, he's perfect for the part!

As much as I love Keanu, there's only one actor for the part of Constantine: Callum Keith Rennie.

Posted by: The Couch on June 7, 2003 11:00 PM
What's on your mind?.....
(new here? please read this before commenting)
Remember, this is a fan site.
Keanu Reeves is in no way connnected to this website.
Please do not make a comment thinking he will read it.
Comments are for discussion with other fans.
Thank you.