Very Big Love to Jena, for typing up the Premiere article.
A portion of it is below, spoilery only for purists... 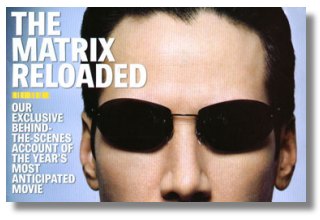 Keanu Reeves is primal-screaming. Standing at the bottom of a crater set some 20 feet deep - all that remains of a sidewalk that's been torn apart by two superpowerful entities doing battle in the skies overhead before crashing to the ground - and drenched by four massive sprinklers that, during the wide shots, dump between seven and ten tons of water per minute on him, the star of this year's most anticipated sequels lets out the kind of deep, disturbing, bowel-loosening cry that would terrify small children, nervous animals, and any visiting journalist. Lasting no more than two seconds, it echoes around Stage 2 at Fox Studios in Sydney, Australia, for what seems like an eternity and, give or take a few consonants, can be transcribed thus: AAAAAARRRRRRGGGGHHHHHH!!!!

"Sometimes it's to raise my energy, and sometimes it's frustration," Reeves explains almost a year later, sitting in the lounge at Chateau Marmont in Los Angeles. "It's a way of venting, expressing my frustration, at myself and not being able to realize the event. This exclusively happens when I'm dealing with the action sequences, because I want to make it super-perfect."

In 1999's The Matrix, Reeves's character, Neo, awoke to the fact that the world as he knew it was a computer-generated construct designed to keep humanity blissfully unaware of it's status as energy source for a race of sentient machines. By the movie's end, he'd been transformed into The One, mankind's prophesied savior and key to it's freedom from the Matrix, flying up past the camera like some kind of comic-book superhero ready to wage war against the machines. Now, in the sequels The Matrix Reloaded (due May 15) and The Matrix Revolutions (November 7), his abilities have developed in ways fans of the first film will be drooling about for years. "He's self-actualizing inside the Matrix," says visual-effects supervisor John Gaeta, who won an Oscar for his work on the original. "He's superpowerful because he believes he is. He has the ability to knock down many more obstacles."

It's day 141 out of an eventual 270 in the 18-month-long production, during which both sequels are being shot. As rain lashes down inside and out (Sydney is experiencing what's tantamount to a monsoon), Reeves, dressed in a black, full-length, high-collared coat, is once again facing off against Agent Smith (Hugo Weaving), the besuited ubervillain who, despite having been blown apart at the end of The Matrix, has become Lex Luthor to Neo's Superman. Today's scene (number 764) forms part of the Superbrawl, a thunderous fight at the climax of Revolutions in which the enemies duke it out in and above the megacity that is the Matrix, before reducing an intersection (the same one Neo took off from at the end of the original) to rubble.

For now, however, Reeves is required simply to come up into frame and utter four words - "Because I choose to" - his attutide implacable, his face impassive. And chiseled: Months of training and a special diet (including red meat if he would be fighting; fish, rice, and vegetables if not) have left him ultralean, giving the impression that he is several inches taller than his six feet. Time and time again he delivers the line with differing tonation, until writer-director siblings Larry Wachowski, 37, and Andy, 35, are satisfied not only with his performance but with the way the rain and the lightening effects combine with it. Between takes Reeves confers with the filmmakers, whose dress sense and demeanor owe much to the excellent Bill and Ted, and who sit slightly apart from the crew under a black-tented viewing station that houses their video monitors. Or else he stands alone beneath a heater, towel around his shoulders, a Do Not Disturb sign hung on his face. Occasionally he will disappear outside to where the production has set up a hot tub in which he sits, in costume, and tries to warm up.

As the day proceeds, Reeves gets wetter still. Gallons of water continue to rain down (filtered out of the set through an elaborate drainage system in the floor, it will be treated and used again by the production), and he is pelted by a jet of thick orange liquid and chunks of gray foam, which simulate the effect of Smith coming up and out of the ground. It's while shooting this particularly sticky session that Reeves's primal scream erupts, and to be honest, who can blame him? They've been filming this sequence for the past couple of weeks and still have a week or so to go. Every nuance, every emotion, every drop of water must be to the Wachowskis' liking. The sprinklers have even been fitted with special nozzles to produce "chubby rain," fatter than normal drops, which, when photographed in a certain way, will look like the dripping code of the Matrix. "There's no extranious movement, gesture, behavior," Reeves says. "It's very pure. What they do in their films is like a samurai strike with a sword - one perfect gesture all concentrated in that one moment. I got very familiar with what super-perfect meant."

I like that phrase "chubby rain", lol!
and a wet keanu isn't all that bad either :D

F**k. There is no way I can wait until these movies come out.

OMG! IT sounds so great! I need to get this issue of Premiere! Just think of it this way-- It opens NEXT month....I can't wait....

Posted by: stacey717 on April 9, 2003 03:48 PM
What's on your mind?.....
(new here? please read this before commenting)
Remember, this is a fan site.
Keanu Reeves is in no way connnected to this website.
Please do not make a comment thinking he will read it.
Comments are for discussion with other fans.
Thank you.