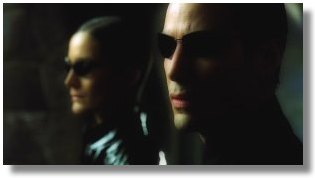 It's been reported that The Matrix Reloaded will be released on May 15 worldwide in an effort to avoid piracy.

Keanuweb's Merlin has a bit of an exposé about a possible MPAA leak. Go read it.

Kudos to Merlin for bringing attention to this.

I imagine that it's not as easy as the MF forum poster makes it sound, and I'd be willing to bet that if somehow illegal copies were made, that they would be easily traceable to the source.

But hey, maybe impressing your girlfriend's brother's friend's friend is worth your career and a whole world of shit...

(can you imagine? I'll bet they genetically breed special lawyers for this type of thing down in the Warner Brothers Labs.)

Heee! If this is true, then this guy/girl must be the biggest smuck in the world for bragging about it! What a dumb, dumb move... I wouldn't want an illegal copy, anyway. When given the choice to watch the Matrix (*Keanu*) for the first time on a small screen or see it 10 meters high (I don't know your inch/feet/stone whatever system) then I'll go for the BIG Neo! :-)

Posted by: Keanuette on March 13, 2003 01:37 PM
What's on your mind?.....
(new here? please read this before commenting)
Remember, this is a fan site.
Keanu Reeves is in no way connnected to this website.
Please do not make a comment thinking he will read it.
Comments are for discussion with other fans.
Thank you.