Please come to Vegas in the springtime

Good grief, I need a Dogstar fix. I whined way back in December of 2001 that it was time for a show and now it's been 19 months? It's critical, I tell you. Thankfully Bret had a couple solo shows last year to quell my cravings but I'd sure like to see the whole band play again, soon.

And yes, I would even break my 500 mile rule (though not my 'flying over the ocean' one) to see them.

Of course, it would be even better if they would just come to Vegas and see me play a gig. 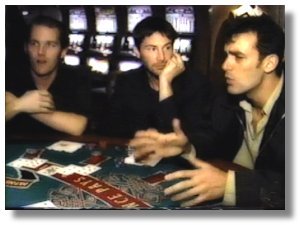 According to a link found by Keanugirl at the DMB it costs a cool
15 grand to book Dogstar. Of course, it also takes a lot more, not the least of which is working around some people's (*cough*thebassplayer*cough*) schedules.

Well, I really can't work magic on either of those obstacles, but I can help with finding a venue.

Really, there's a veritible buttload of places to play in my little hamlet of sin.

You've got The Joint at the Hard Rock Hotel or House of Blues- Las Vegas. Surely someone has worked with a certain HOB exec in a film or something and could pull some strings, no?

Caesars is right out. Don't even think about it, guys. I don't know who was zooming who last year, but trust me - Dogstar on Cleopatra's Barge is recipe for mayhem and disaster. And I don't know of any other live music venue at that property, unless they plan on opening up for Celine.

If the Dogboys really want to get back to their punk rock roots, they could book a gig at The Huntridge. No comp lodging like a resort gig, however.

That's OK, they can stay with me. The cats hardly ever pee on strange musical equipment in the hallway anymore.

Of course, the best choice would be for them to play at Club Madrid again. I promise to wear a plunging neckline and keep my drink off the stage this time. 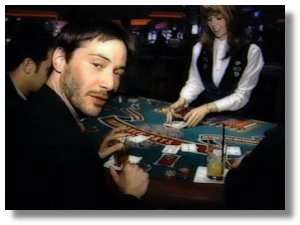 Think about it, guys.

You know you want to come see me rock Las Vegas.

Look at this way, Krix, now you have a LEGITIMATE reason to drink!!!

Posted by: Lori on March 3, 2003 05:43 PM
What's on your mind?.....
(new here? please read this before commenting)
Remember, this is a fan site.
Keanu Reeves is in no way connnected to this website.
Please do not make a comment thinking he will read it.
Comments are for discussion with other fans.
Thank you.