little sticks of peace and coughing

Frasier: Now, Bebe, tell me, what is so wonderful about smoking?

Bebe: Everything. [with actions] I like the way a fresh firm pack feels in my hand. I like peeling away that little piece of cellophane and seeing it twinkle in the light. I like coaxing that first sweet cylinder out of its hiding place and bringing it slowly up to my lips. [getting more erotic] Striking a match, watching it burst into a perfect little flame and knowing that soon that flame will be inside me. [laughs] I love the first puff, pulling it into my lungs. Little fingers of smoke filling me, caressing me, feeling that warmth penetrate deeper and deeper until I think I'm going to burst then... [imitates the noise of smoke flooding out of her] ...watching it flow out of me in a lovely sinuous cloud, no two ever quite the same. 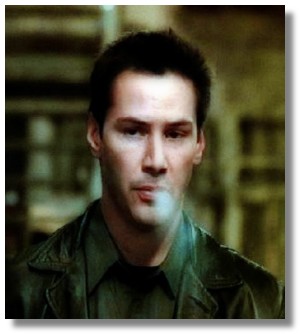 Amazingly, I can go a whole day without a cigarette. If I'm at home, I usually don't smoke. But as soon as I get in the car, I have to have a cigarette. Coffee? yes, please. Let's sit outside so we can smoke.
And what's the point of living in Las Vegas if you can't wander from place to place with a drink in your hand and smoke pretty much anywhere? There are people whose job it is to empty ashtrays.

I'm good for the economy.

I'm also the Contessa of Justificatia, and have convinced myself that Ultra -Light Marlboro 100s are actually good for me.

One time, before a Dogstar show, I bought a pack of Marlboro Reds.
Just in case I bumped into Keanu and he was out.

I ended up smoking them.

I smoke. I don't want to quit. I don't care to quit. Please don't make me quit. Marlboro Lights, though. I tried smoking reds, but those things will put hair on your chest.

Hi Tyler, what a funny comment about the hair on
the chest. It didn`t happen to Keanu!

Believe me, that pack of Reds lasted me days. Much too strong. I always have a safety pin on me...somewhere, so in the event I have to bum a smoke and it's a strong one, I can poke holes in the filter end and make it a "light".
Roi-on the other hand-when he bums a smoke from me, he breaks off the filter entirely.
Gah!

I wish Keanu would quit and I hope you will too krix!

Ultra Lights? You might as well just inhale in a warm room. ;)

Sure it did. Haven't you noticed those little ones right around his nips?

Only place I smoke is my car. My husband hates it so I don't smoke at home or around my kids, and I don't take cigarette breaks at work.

Strictly an oral fixation thing. It was either smoking or DelTaco.

mmmmmmmmmmmmmmmmmm, smokin, watching reeves smoke......my car won't start unless I am smoking, something about it being mine ; )

I used to smoke - at work at my desk in my office all alone, and especially in the car - its so cool in the car, and when you have a cool car, it's even better. But not at home. And I lived alone. (Well, two cats, who probably wouldn't have liked it.)

Let's face it. It looks cool. Mr. Reeves does not need anything to help him look cool; I hate that he does it, but I like to watch him do it. Kevin Lomax' left-handed wedding-ringed drag in DA. Conor O'Neil's frantic left-handed drag in Hardball. Cool as hell.

At some point it isn't cool anymore. When they wheel out the iron lung, for example. But up 'til then, it will always be cool to watch.

*sigh* Sometimes I think I want to quit, but I'm just fooling myself. My body was telling me to quit this morning (after a night of drunken debauchery), but did I listen? No. I just enjoy it way too much. Meh.

Okay, I don't mean to offend but I have to get this off my chest. I'm gonna be Frasier here: Bebe, if you love the feeling of that flame going into you, as it's filling up your chest and that first puff pumping up your lungs, are you gonna love that needle that is stuck into that port placed into your chest as chemotherapy goes into your body to get rid of what happened because of that cig? Are you going to enjoy puking your guts out everyday and watching your hair fall out of your head as you hang on fighting for your life? I realize it's a choice and that's fine, I just worry about those that smoke and I worry about Keanu's lungs and my friends that smoke. It's a filthy habit that kills and I don't want to see anyone I care about go through that kind of shit.

jena - then again, you could be hit by a bus tomorrow (hopefully, not being driving by sandra bullock)

Beg to differ. Not a filthy habit. Know plenty of people going through chemo that never lit up once, including my husband (don't start in about second hand smoke -- I have never smoked in front of him.)

Roxy's right -- we could get hit by a bus tomorrow.

Hi Tyler, I did infact notice those few hairs around his nips but they don`t really count.
I think he would look better without those.

smoke like a fiend. or fiendishly. marlboro reds since 97. i started smoking them cuz they were so strong i thought i would smoke half as many as the lights i switched from. i did smoke less. for a few months. i wanna quit. its the second thing i most want to do. im gunna quit. $3 a pack is not the 85cent habit i began so long ago. i can start again the first time Keanu offers me one and meanwhile he can smoke for me,...'til HE quits. eventually, all us addicts have to quit.

Can I take a guess on what the first thing you want to do? :)

tyler and ~L: I believe that's the first thing we ALL want to do. esp. on a beautiful sunday afternoon.

I love to smoke. I love the way it makes me feel and all that jazz that goes with it. I have considered quitting not because I know how bad it is for me but because my kids keep telling me they don't want me to die. I think I may try again but man, do I love to smoke. It's such a bad habit that I love.

Kat - nobody hates a GOOD habit ... it's those bad habits that make life worth living.

Well, I've had cancer (Hodgkins)and gone through the chemo and it's not fun and one of my best friend's father died last summer from lung cancer due to smoking. So, that's why I preach so much about smoking and here's why I think it's filthy and a bad habit.
1)People reek of it after they've had one, makes me want to vomit and gasp for air.
2)When I go to a bar I come home smelling so bad and my eyes blood shot because of the second hand smoke and my hair reeks something awful that I have to take a shower and wash my clothes.
3) the way someone's house smells that does smoke is twice as bad
4) It's expensive as hell
5) causes eye cateracs, yellow fingers, bad skin
6) It's the No. 1 reason for death among Americans.
Yes, we could get hit by buses, but our chance of getting cancer is higher. Been there, done that, don't want to do it again, nor do I want my friends to. Like I said, I'm not trying to be a bitch and I know it's a choice, I just think it's a filthy choice and that's my opinion.

Well, I've had cancer (Hodgkins)and gone through the chemo and it's not fun and one of my best friend's father died last summer from lung cancer due to smoking. So, that's why I preach so much about smoking and here's why I think it's filthy and a bad habit.
1)People reek of it after they've had one, makes me want to vomit and gasp for air.
2)When I go to a bar I come home smelling so bad and my eyes blood shot because of the second hand smoke and my hair reeks something awful that I have to take a shower and wash my clothes.
3) the way someone's house smells that does smoke is twice as bad
4) It's expensive as hell
5) causes eye cateracs, yellow fingers, bad skin
6) It's the No. 1 reason for death among Americans.
Yes, we could get hit by buses, but our chance of getting cancer is higher. Been there, done that, don't want to do it again, nor do I want my friends to. Like I said, I'm not trying to be a bitch and I know it's a choice, I just think it's a filthy choice and that's my opinion.

Holy shit balls Batman, didn't mean for that to be a double post.

I can't stand smoking in general--and its the only think i don't like about keanu (i regret to say there is something i dont like about him, but that's it). I hope he quits smoking before anything really dangerous happens--and the same for any smokers out there that have some sort of a chance left....

Hah! I, like many of you, smoke AWAY from my husband - at my PC in my attic next to a window ONLY, the car and of course the bar/s WHOO! I don't like sitting in smoking sections in restaurants though, unless I am solely with smokers.

I never smoke anywhere else - but I LOVE it when I DO smoke! YAY!

Ever talked to someone who has been diagnosed with PVD? Peripheral vascular disease. Another hardly spoken about disease of the dreaded nicotine habit. Oxygen flow to the tips of your fingers and toes is decreased because of smoking, and when blood vessels don't get enough oxygen, they die, and so your fingers and toes will begin to turn blue, eventually become black, and then will necessitate amputation.

~L - $3 a pack? Do they subsidize cigarettes where you live? I pay in the neighborhood of $6.

I turned into a cigarette snob some time ago so if/when I smoke, I only smoke pure tobacco and often it is the hoity-toity stuff like Nat Shermans. When Denise and I were in Vegas for BlogCon we wound up paying a taxi to drive us around until we found a tobacco shop that carries Nat's, as we refused to buy the Camels or Marbs so commonly found in the casinos, then headed via the same taxi to the Hard Rock only to discover that Nat's were sold there too! On trips like that, it is indeed an expensive habit. ;)

I am primarily a social smoker and have been known to go without for weeks at a time.

ive been smoking since i was 15 and to tell you im now 25 and i love it and there are some of us out here that love to smoke and dont care what it dose to your body and im one of them i may quit some day but i dont see that day coming any time soon and till that day comes ill keep smoking cause i love it! :)

Gotta say, Keanu is sure sexy smoking. Anyone know when or how he got started?

Posted by: JFM on August 16, 2003 04:12 AM
What's on your mind?.....
(new here? please read this before commenting)
Remember, this is a fan site.
Keanu Reeves is in no way connnected to this website.
Please do not make a comment thinking he will read it.
Comments are for discussion with other fans.
Thank you.