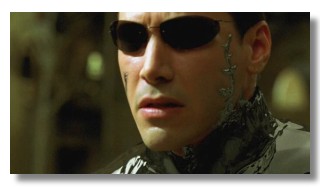 Can you believe there's only 85 days left until the release of Reloaded?
Time sure flies...
There's a little article here, no real new information, but at least Joel doesn't mention "the bar". Guess someone must have forwarded him my memo.

There's a cute little satirical article at bbspot that you might get a giggle out of.

Maybe I'm thin skinned or something but poking fun at Mr. Reeves doesn't sound like my idea of a fun evening. I guess I should resign myself to the fact that he will never get the respect he deserves. I just remember his look of horror when they were making fun of the Matrix at the MTV awards... his look was one of "here we go again - how the hell can I get out of here?" It was meant to be amusing but came off mostly mean at Keanu's expense. Then again, when it comes to Keanu bashing, there's not much I'll put up with, let alone fund.

Maybe I'm pm-essing. I should lighten up, huh.

I interpreted it differently. I don't think Keanu cared a fig.

85 days...I am going to start twitching soon.
Thank You Krix, we are enjoying the sounds of Dogstar tonight. *smiles*

Hey Chianti, don't worry about being *sensitive* towards possible Keanu-attacks. It's completely normal, I feel very protective towards him also sometimes... Sniggering boyfriends and 'just a himbo' comments turn me into a lioness defending her cub.
Anyway, whoever makes a joke about him, will probably not have his paycheck, his grace and the loyal fans that 'defend' him, so Keanu's the winner in whatever situation :-)
Should you be upset the next time though, here's a tip; A Matrix-style aerobics-session which contains of a series of aimless kicks into the air always rids me of any lingering 'negative' vibes :-) Watch out you don't strain a muscle though, it's very painful ;-)

Posted by: Julie on February 20, 2003 08:37 AM
What's on your mind?.....
(new here? please read this before commenting)
Remember, this is a fan site.
Keanu Reeves is in no way connnected to this website.
Please do not make a comment thinking he will read it.
Comments are for discussion with other fans.
Thank you.