Last night, at the party I wasn't invited to... 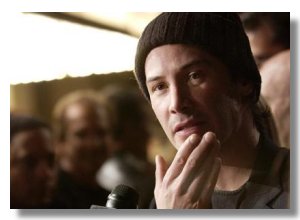 This is a great picture from last night's soirée. Some more can be found at Yahoo news photos.

And there's also some others at Club-Keanu.

A nice way to start the morning...no?
Now where's my damn coffee?

Of all the pix, that's my favourite...

I want to see a smile on his face for once!!
Krix,he looks lonely,go over to him,or under him...whatever you chose.

Haha. Oh, since you asked so nicely Nat, I suppose I could selflessly volunteer to throw myself under Keanu.

You know, for the good of the Empire.
;)

Speak of the Empire, how are things in Keanuoglia?

And why is it that handsome actors always dress like, well, shit when they're out and about? Is it some sort of "I'm more than a pretty face" statement?

Scott, I can not speak for other actors however,
this Handsome Actor, has no contrivance for
appearance. He simply has nothing to prove. Only Truth....

You were right, I'm not an agressive person, but Scott DOES need a spanking! I'm hereby reserving my place right behind Krix in the line to do so!

What? I didn't think his question was bad.
Keanu *does* dress like a damn slob sometimes. I don't think he does it intentionally but rather that he really doesn't care much. He wears what he's comfortable in.
And before you get all fired up to beat on Scott, go read his blog. He's an amazing writer and a beautiful soul.

:-D I already saw his blog! I was just looking for an excuse to spank him ;-) gently, of course...

And in case you think that's strange, I have 2 words; 'shaving fetish' :-)

You know Krix you could always post a picture from the American Cinematique awards. That might give Scott pause.

this is my favorite pic of the lot, too. i love it when we get his face and his hands, in close up. the man looks lovely, no matter what he's wearing. right scott?!

Posted by: Lori on February 5, 2003 09:20 PM
What's on your mind?.....
(new here? please read this before commenting)
Remember, this is a fan site.
Keanu Reeves is in no way connnected to this website.
Please do not make a comment thinking he will read it.
Comments are for discussion with other fans.
Thank you.