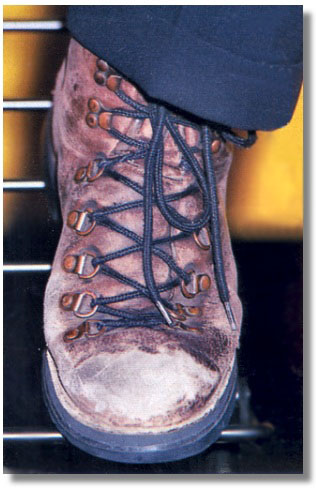 Is it wrong that I get all swoony over a piece of footwear? I know I'm not the only one. Although I might be the only one that has practiced dropping my cigarette case in an adorably flustered way so as to have an opportunity to touch a sacred Timberland, should the opportunity ever arise.

OK, I haven't actually done that, but I've thought about it.
Which is twisted enough...really.

I know there was a bit of a scare when those 'About Schmidt' and Thailand photos came out that The Boots had been retired, replaced by some bland Hush Puppy looking things. I actually had at least two lengthy, almost panicky conversations about the fate of The Boots. They seem so much a part of him. Keanu without The Boots is like Cindy Crawford without the mole, like Rip Taylor without a bad wig and a bag of confetti.
It's just wrong somehow.
Like with most things about Keanu Reeves, we can speculate as to the "why" of The Boots but we'll never really know the story behind them. Are they sentimental? Is it a comfort thing? Utilitarian? He certainly can afford the best boots money can buy. A fancy Italian creation perhaps, sturdy enough to use as back up brakes for the Norton yet light and posh for an evening of spontaneous ballroom dancing.
Still, we always see him in the Timberlands.
Those mysterious, so-worn-they're-molded-to-his-foot Timberlands.

I think The Boots have trancended "quirky fashion trait" and have in a way become a symbol for that certain intangible "Keanu-ness" that many of us adore.
And so....we adore....The Boots.

I suppose(again, like most things Keanu), they should not be over-analyzed.

The Boots just ARE.
We are not to question The Boots.

The Boots are Zen.

"The Boots are Zen."

That covers it for me Krix, I don't need (or really want) to go any further.

Get my E mail about Behind The Red Door?

ah yes, very well put as uaual my sweet....and I am so gonna be looking for a swank ciggie case by the next show :)
it could be like a mass hysteria thing, a stylized reaction to the accidental stumbling upon the reeves, spoo, I dropped my.......sigh, probably not but a wonderful thought just the same.

krix, Your Boot-I-Licious commentary is simply coolness! I'll have to save both it and the poem "Casey's Boots". And you're right -- "the boots JUST ARE"... *smiles for miles*

Posted by: Lori on February 9, 2003 10:21 PM
What's on your mind?.....
(new here? please read this before commenting)
Remember, this is a fan site.
Keanu Reeves is in no way connnected to this website.
Please do not make a comment thinking he will read it.
Comments are for discussion with other fans.
Thank you.