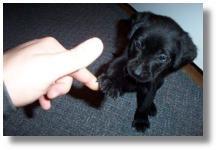 This is my best friend Eric's puppy- "Bonus".
He's just too cute not to share with the world.

Let your friend know I think that's the best name.

It's right up there with a person I used to know that named her dog "Pepsi".

Where does everyone come up with these great names?!

Very cute puppy. Damn, I need a home so that I can keep one!

I heard the best pet name today "Hendrix". How cool is that!!

Isn't he the most adorablest thing ever?
I think he's going to be keanuvision's unofficial mascot.
You know, besides Keanu's ass.

he kinda looks like keanu, doesn't he? yeah, if keanu were a puppie, he'd look just like Bonus...

Humphrey doesn't like Keanu, I think he's jealous. If I bring home a magazine with Keanu on the cover and put it down, Humphrey sits right on his face.

Shut up, you SLUTS!

Jealous of everything and everyone...

Tell Eric to take very good care of him or I'll drop by to kick his ass! :)

Posted by: Bea on January 25, 2003 12:49 PM
What's on your mind?.....
(new here? please read this before commenting)
Remember, this is a fan site.
Keanu Reeves is in no way connnected to this website.
Please do not make a comment thinking he will read it.
Comments are for discussion with other fans.
Thank you.