My Neo, what a big stick you have

All together now...
Elsinore Rocks. 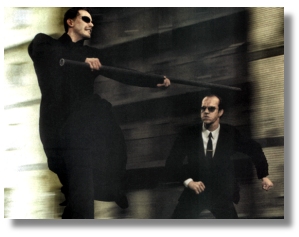 This picture is from today's Variety. Thanks again to Elsinore for sending it out.

With just over 100 days until the release of Reloaded (with Revolutions following sometime in November), the buzz machine is going to be humming along with increasing intensity for these movies. With any other project I would be wary of the product not living up to the hype, but with The Matrix Trilogy, I think we are going to be blown away beyond our expectations.
Just the stills of the fight sequences alone are breathtaking. I can only imagine what it's going to be like, larger than life, in motion.

Pardon my ignorance, but are "they" really releasing Matrices II and III on the same day?

No, Reloaded opens May 15, and Revolutions will open sometime in November. I think the 4th?
I'll clarify it in the entry.

I don't think you need to clarify as much as I need to pay attention ;)

I think my heart will burst and my head will explode when I see this flicks...

I hope hubby doesn't send me off to the loony bin beforehand...LOL

pssst... thanks. now i just have to print it. :) and yes, elsinore rocks hard. i get the daily picks too. mmmm

i feel like i've been waiting so damn long for this that it's hard to fathom that it is indeed only 113 more days...and then to think less than 6 months later we get another one. it will be like dying and going to heaven -- twice! whheeeeeeeee!!!!!

You know what? After looking closely at this image and reading the article on calanderlive,
http://www.calendarlive.com/movies/cl-ca-lynch19jan19,0,3816947.story
I'm thinking that these might be completely digital renderings of Smith and Neo.


Posted by: krix on January 22, 2003 02:08 PM
What's on your mind?.....
(new here? please read this before commenting)
Remember, this is a fan site.
Keanu Reeves is in no way connnected to this website.
Please do not make a comment thinking he will read it.
Comments are for discussion with other fans.
Thank you.