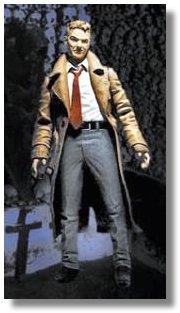 I've been trying to follow the progress of the Hellblazer project over at SuperHeroHype.com. For anyone who doesn't know the basic story, here's what they have to say about the plot:


John Constantine, has been to Hell and back... Using his knowlege of the occult, he wages a war against the demons among us. With the help of a female police officer, Constantine finds himself face to face with the agents of darkness called the "First of the Fallen".

Will mankind survive, will John and his trademark trenchcoat escape the demons' clutches?? We'll have to wait and see as [ Nicholas Cage Keanu Reeves ] becomes... CONSTANTINE.

Now, there was also some understandable confusion over just what the hell was going on, since Lorenzo di Bonaventura was reported to be involved in a Constantin film project, but one based on the historic figure, not the occultist of the Hellblazer comic series. So is Keanu going to play the "right bastard" John Constantine or the Roman Emporer?

Thankfully, it looks like it's going to be the former according to Comics2Film, which has this to say:


Comics2Film followed up on Lorenzo di Bonaventura story from Wednesdays trades with regards to the former studio big wig's involvement with the Constantine movie.

While both Hollywood trades indicated di Bonaventura's first project as a producer would be a movie called Constantine (or Constantin) the reports conflicted as to what the nature of the project is.

A source close to the development effort of the Hellblazer adaptation told C2F that as far as he knows di Bonaventura is not coming on board the comic book movie.

The Di Bonaventura project will be a historical epic concerning the Roman emperor, as was reported in Variety. At this point both projects have the same (or similar) titles. Perhaps the comic book movie could be retitled John Constantine: Hellblazer.

Our source also confirms that Keanu Reeves (The Matrix) whose name has been mentioned in a couple of recent articles is, in fact, attached to the project. However, he has not signed to appear in the movie at this point.

Or at least it's going to be once he signs. If he signs.
Augh, this is all too much for me. I remember the good old days when I just watched a movie when it came out. Now I'm buying books and comics on mere speculation.

In any case, I won't be buying a lot of Emporer Constantin shwag.
I did however snag that nifty little John Constantine action figure today.

Yes it is. Wonder if you bought the same comics I did. I bought three of them without even knowing if I would like the first one.

And yes, I bought Thumbsucker too.

3? I bought 30 of them. Not many in sequence either, which got frustrating because so many of the arcs are serialized over several issues. It is a fascinating character though and with the right director this movie should be very good.

I know this isn't exactly on topic, but I'm all for keeping Nick Cage off the screen until he returns to his formerly uncosmetically enhanced self.

scott, he's weird, is what he is... and as for Constantine, i still say NONONONONO (but i'll still go see it, if keanu does it, of course!)

Nic Cage has had sugery...?

I'm for keeping Nic Cage of the screen. period.

You're not sick, dear. You're like me; you have an incurable case of Keanuitis. I'm going to die from it. LOL

One of the best moments in comic history, from about 1990 or so:

John Constantine is dying of cancer. Lung cancer, naturally. He's terminal, incurable, and over the years he's pissed off various demons so when he goes to hell (and he is going to hell) he's going to have a more than usually hellish afterlife.

Constantine gets pissed off with being in the cancer ward and not being able to smoke, so he checks himself out and goes to visit an old friend -- a mage who Constantine hopes might be able to cure him. Turns out the mage is also dying from some incurable condition coming from his dediction to drinking, liver cancer or whatever. (Those mages and their vices :)

The mage friend is so far gone he's actually croaking at that moment and Lucifer (or one of the three who rule hell as a triumvirate in that universe) turns up to claim the mage's soul.

Lucifer starts chortling over what fun they're going to have with Constantine when he dies. Constantine is playing it cool and invites the devil to have a nice drink with him from the mage's well stocked cellar of home brewed wine.

Lucifer gets a nasty shock when he realizes that the mage brews his wine with holy water, and Constantine brings the whole wine cellar down on the devil's head. Of course, that doesn't solve any problems for Constantine but just gets him in deeper shit.

How he manages to avoid dying from his terminal cancer is brilliant and a darn good story.

Posted by: Kelly on January 14, 2003 10:03 AM
What's on your mind?.....
(new here? please read this before commenting)
Remember, this is a fan site.
Keanu Reeves is in no way connnected to this website.
Please do not make a comment thinking he will read it.
Comments are for discussion with other fans.
Thank you.