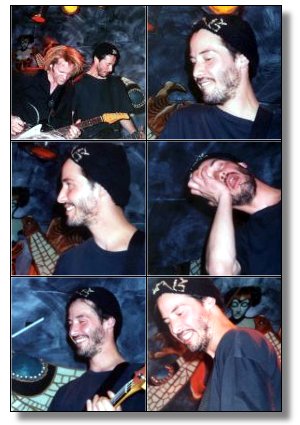 The pictures above are from April 24, 1997 - the night Dogstar kicked off their Little Visionary tour at the Dragonfly club in Hollywood.
According to the schedule I found at KeanuNet, the band had over 50 gigs in just under four months.

I tried to find something about the show on the web, but had to wade through too many bad Kevin Costner movie articles, so I gave up.
Anyone out there at that show? I'd love to hear about it.

I don't expect them to do anything like the Visionary tour ever again, But I'm still hoping we get a few shows by spring.

Heeee! Don't know about you, but I had a great Xmas! Everyone liked the food that I cooked & I managed not to explode after I'd eaten it! PLUS a quiet work-day AND new Keanuvision-updates! So... I was about to burst into the song 'oh happy day' but then I saw that Bea was quiting (sniff) and the news about your far way friend Sharon... That's really bad. This is the reason I always tell people that I love them (or hate them). I lost many people, and this has thaught me that nothing's more important then letting people know that you care, even though it might seem silly at the time. I'm sure that if any relatives of her ever read your post about her, it will touch them deeply, and mean a lot to them. Take care, Ok?

hey Krix... i just wanted to let you know i lost my domain (midnightbliss.net) and have moved to http://www.mizdos.com/lilith :)

and damn, he looks no matter what he's doing... break me off a piece of that! :D

according to the man himself (with verification from Rob and Bret), they will be performing August 12, for sure. of course, that's what keanu and co. told me in my DREAM this morning, so i can't guarantee it won't be a dream performance, but hey, desperate times...

Haha, Tell your dream keanu that April in Las Vegas would be much better for me.

Yeah, I was there! Yay for me! Just teasing. ;)It was a small venue, the bar was on the right, there was an outdoor patio in the back, the marquee didn't have a name on it, just a picture of a dragonfly... Um, it was mostly friends of Keanus & the band there (Alex Winter was there!) and some L.A. people. I think they were calling themselves "Six Pack" for that gig (?), so not many people knew it was "dogstar" per se. Hence, the relatively low turn out of peoples. Since it was mostly friends, the band was really relaxed and loose. ;) I could be confusing a couple of gigs with this one, but I believe that's right. I also believe that Keanu had a cast on his leg at the time, 'cause I remember trying to read what people wrote on it. LOL His brown pants were ripped, to make room for the cast and I think there might have been a chair on stage, for him to sit in (that he didn't use). Also, the stage was very low and close. I mean really low (OMG!). I've only been to one or two other Dogstar gigs where the stage has been that low and they were *right there*. No barricades or nothing (awww, the good ol' days... Sigh). I remember after the show was over, Keanu hobbled across the street (on his crutches) and gave some girl he knew (or was seeing?) a hug and kiss before she drove off in a car. It was a good show, but as you can tell, it's been a while since I've visited that memory. Dogstar needs to play some new dates soon damnit! Maybe *they* don't need to, but the fans do! :) Sorry, I can't think of any more details right now and I apologize in advance if I'm mixing up a couple of shows with my review of this one.

Natasha! You completely rock!
Thanks so much for sharing that.
I didn't see Dogstar until the Happy Ending tour, and I love hearing about the old shows. Seems much more laid back.
I can only imagine what the scenes are going to be like if they do any dates after the release of the upcoming Matrix films...

I'm glad that you liked my review. As meandering as it was. :) I'm trying to think of some other things to say about that show, but alas, to no avail.

Oh man,when 'Speed' came out the Dogstar shows were crazy!!! Lots of people came out. Some chick was even holding a video of 'Speed' up during one concert in San Diego. :oP I think with Keanu's 'Matrix' fame (if Dogstar does shows after Reloaded/Revolutions come out) I can times the craziness by a thousand. Or more. Sigh. I was so hoping that Dogstar would play a few shows before May and try to bypass the madness. I guess a girl can still dream... :) Keep up the great work on your site Krix!!

maybe they DID say April 12 after all... actually, my question to dreamkeanu was, "when will y'all be playing again?" his first answer? "right now, baby." whew! then later, he changed that to August (no, make that April) 12th. i'll get clarification if i see him tonight...

Posted by: Lori on December 30, 2002 11:10 PM
What's on your mind?.....
(new here? please read this before commenting)
Remember, this is a fan site.
Keanu Reeves is in no way connnected to this website.
Please do not make a comment thinking he will read it.
Comments are for discussion with other fans.
Thank you.