Matrix OS updates and some other news

The new photos that Morpheus promised us are up at TheMatrix.com 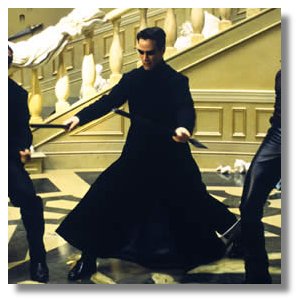 I'm so glad that the Matrix' web team is so on it. The hype is really going to start to gain momentum in the next few months and I can't wait to see what they come up with.

In other breaking news, Tesseract of KeanuSluts.com (GREAT name!) reports that A&E is doing a Biography program on Keanu next year.
So go check that and the rest of the KeanuSluts site out.

Also, Keanu was at the premiere of Sandra Bullock's new film with a very cute young lady the other night. You can see the photo and over at Yahoo news. Thanks to Margarete for that link.

thanks for all the links. the keanusluts have a huge setup no? damn, i was there for like 30 minutes...lol

Ohmygod! The sluts are amazing! Their gallery is just incredible, I had to stop myself from kissing the screen! And remarkably 'tasteful' as well, considering the name ;) Thank god for your Sims, otherwise I'd have a NEW favorite Keanu-site! :-)

Yes, they've really made it into a great site.
Nicely done and I *lurve* the swirlies.
Last time I was there it was just a forum (and I threw a tizzy at someone for hotlinking my calendar, heh.)

How about the cube? You can manipulate the movements with your mouse... It wasn't untill after 5 minutes of frantic clicking to get it to STAND STILL on a particulary nice pic that it dawned on me that I'd better go to the gallery itself! Ouch! But hey, I'm learning more each day :D

Nice site yes, and they're saying they're helping with the AE bio? Isn't this the site where the members spread all the gay rumours about him?

I don't know anything about rumors, missy. But I do believe that their forum welcomes Keanu fans who are gay without berating or diminishing their fandom. Which is a good thing.

I had heard Erwin Stoff was producing this, so why would they need information from a fansite?

I don't know that they *needed* information, but I think it's great that a Keanu site was tapped to contribute. I mean, where would he be without fans? And I fully believe that there are fans out there that have a huge, almost encyclopedic (is that a word?) amount of knowledge about him and his career and would be a huge resource to any project about Keanu. Because it's out of love that we read and learn and study the way he moves and listen to what he says. Not because it's our job, like a publicist or manager.

My error, Erwin isn't producing it, he's working "with" the producers, so I think A&E will get all the accurate information from him, family, friends, co-stars, etc. As for what part the keanusluts played, who knows, maybe a brief mention about web fansites, I doubt they've given any information about Keanu himself since they don't know him. Why not mention Keanuvision. :)

Because comparatively, I don't know JACK about Keanu Reeves.
I just think he's neato.
They can quote me on that if they'd like ;)

I hope this isn't one of those bore-me-to-death bio shows, where everything's too rehearsed.

The new Matrix pics are a-okay! :)
Tks for posting!

Re A&E's biography on Keanu, all I can say is YAY and finalmente!!!!

Thanx for a most excellent word, krix!

A&E using the Keanusluts for research? There goes my faith in that show.

dujour, why don't you go a couple posts up and sing a little christmas music, it's sure to cheer you up.

It is not a "gay" site nor it is a "straight" site. It is what it is without trying to censor. The Keanusluts contributed to the A&E biography, which is still being put together, by having an extensive news database and by forwarding memorabilia that some of the founders and members have have collected, such as original magazine articles and posters.

As for the name of the site, it is a long story, but a funny one for another day and time.

Krix, thank you for the kind words. I am sure that Tesseract appreciates them. I know I do.

Peace on Earth
Goodwill to each of you,

::*puts another hatchmark on the "drinks to be bought for Tyler" list*::
;)

I've read that board at their site and it's like reading the tabloids, the sluts say he's gay bi and hooked on drugs among other stuff. But if that's what you like.

I haven't read their board. It seems it was down this weekend. If you're a regular reader of this site, you'll know I'm not down with the tabloid fare of any kind. The keanusluts site itself has a great article archive and I believe that and some memorabila is what was used for research purposes. I really try not to judge a site by the members of its forum. In any case, if you don't like it, don't go there. But my site's comments are not the place to vent about other sites or fans.
Thank you.

One of many reasons I enjoy this site, (and a few others) no gossip, just lots of Keanu adoration! Thanks!

Krix, I am aware of your last words, but could I please, please, please just say one thing to Tyler? Aw, please??? I just want Tyler to know that I meant it as a joke and did not mean to pin them down as 'gay' -and there is nothing wrong with that, anyway- It's just that I found the graphics so remarkably beautiful that I figured it HAD to be done by someone more elegant then me! :-) Aw... I hope you don't hate me now for going against your 'wishes'... Because I totally agree with luvske... I'll shut up now, I promise!

I would just like to say a huge thank you to all those who said they liked the graphics over at Keanusluts. I did the designing over there, including the *swirlies* :) I really appreciate it when people admire what I do.

Krix, what you have said about both the A&E bio and the Ksluts site has been really super nice. We are all grateful for your support. Thank you

Posted by: Elements on December 16, 2002 10:46 AM
What's on your mind?.....
(new here? please read this before commenting)
Remember, this is a fan site.
Keanu Reeves is in no way connnected to this website.
Please do not make a comment thinking he will read it.
Comments are for discussion with other fans.
Thank you.