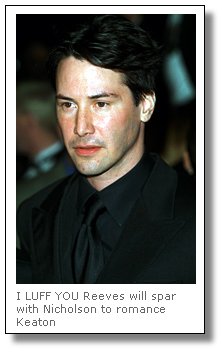 The captioned picture above is from EW.com's version of the lastest news on the three movies that Keanu has slated for 2003. The caption just struck me as a bit bizarre. Does EW always put stuff like that? LUFF? Sounds like the copy writer has a crushy-wushy.

Also, has anyone else noticed that since you've gotten a computer that your handwriting sucks? I'm trying to write some holiday cards and I'm appalled at my own scribblings.

Well, at least you are one of these nice old-fashioned people that still goes through the trouble of sending people a personal message instead of a corny e-card... I'm sure they will LUFF you for it!

Has he really signed?

About the handwriting: it's a world modern phenomena. I can't really experience it, 'cause I write A Lot at work. But I don't like writing anymore. Typing's so much better!

my handwriting is still LUFFly... ;)

Heh, mine isn't that much worse than it always was, but it's the actual mechanics of writing that I mess up. Mid-word I'll forget how to write the next letter. It's pathetic. I should print everything.

My handwriting sucked before the computer, so at least on the PC, people can make out what I am typing (usually, unless I go nitro fast and the number of typos increase - I type too fast for my own good at top speed).

i used to get complimented on my pretty penmanship. ever since i started using my computer for everything, my handwriting is awful... i'm trying to do Christmas cards too and this is NOT going well. :)

I have to write all the damn time and I'm constantly looking at my hand as if it's been possessed. I have no idea who I'm channeling anymore

Posted by: Da Goddess on December 9, 2002 05:06 PM
What's on your mind?.....
(new here? please read this before commenting)
Remember, this is a fan site.
Keanu Reeves is in no way connnected to this website.
Please do not make a comment thinking he will read it.
Comments are for discussion with other fans.
Thank you.