Thanks to both kaz and Jena for this... 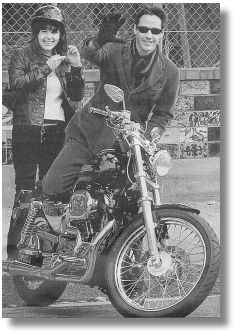 And the copy that goes with it reads:


MATRIX star Keanu Reeves brought a little bit of Hollywood to Paddington yesterday when he stepped out with a mystery date for lunch.

"I've met some wonderful people and eaten at some great restaurants. It's been really nice to be in Sydney and experience part of Sydney."

Reeves and his date  a 20-something redhead  turned heads when they rode down Oxford St on his chrome and black Harley-Davidson. The couple were headed straight to Paddington's trendy Bistro Lulu, where they sat at a "goldfish bowl" table looking onto Oxford St.

The star of The Matrix, Speed and Point Break, shared oysters with his date before enjoying a sirloin steak, washed down with a couple of glasses of red wine.

"He kept to himself and seemed to enjoy himself," confirmed Bistro Lulu restaurant manager David Harris. "He has been here a few times. He even stopped for a photograph with a young girl outside when he left."

Dressed in a grungy khaki suit and a scarf, Reeves and his date, who wore black jeans and a black leather jacket, spent two hours at the restaurant.

He said his date was an "artisan" who worked with him on the Matrix series, and complained that often his relationships were misrepresented in the press.

"There have been a few quite serious invasions of privacy," he said.

Reeves said he didn't mind being photographed but thought it was "inappropriate" for the press to speculate on the nature of his relationships.

I was on the fence over posting this, but considering that he actually spoke with the paper and is waving at the camera, I'm going to go ahead. I'll go back on my anti-hypocrite medication tomorrow.

Besides, he looks fucking great and happy, and I think we all like to see that.

And look....he's doing the foot thing.

he looks great doesn't he? thanks for posting that!

OH MY GOD, krix, thanks! It's so good to see him looking happy, and actually waving again. Just lovely, with the foot thing and all... : )

God, he looks hot! Now, if we could just get "her" off the back of that Harley, and my ass on, it would be perfect!

Harley Sportster 1200 . . . BTW, Krix, I thought of you yesterday, I was at one of the local bike shops and someone had a pristine black Norton Commando 850 parked out front :)

Hey Rhonda, only if your getting a ride with him means you'll introduce me, 'cause you KNOW the only reason keanu isn't married yet...

Lori, of course, he's saving himself for you, sweetie! Is that the right answer?

Well, more like because he hasn't met me yet. I'm not implying that he's *consciously* saving himself for ME, but he'll know it when we meet. (I'm a mess.)

Bea, the inward foot turn. Don't you have the pidgeon-toe fetish?

Krix, was that you or Humphrey doing that pouncing? Just trying to help out... ; )

I have a pidgeon toe fetish...:D

LOL... I had to zoom in the picture to see that. :)
That's one of the things I love about him. (besides that one pic he's literally floating).

Posted by: Craig on August 23, 2002 06:57 AM
What's on your mind?.....
(new here? please read this before commenting)
Remember, this is a fan site.
Keanu Reeves is in no way connnected to this website.
Please do not make a comment thinking he will read it.
Comments are for discussion with other fans.
Thank you.