The lovely Miho of 999.squares has some scans of the posters for the upcoming Dogstar shows in Japan. According to her translation over at the DMB of this ad, the boys are sharing the bill at Tivoli Park, Kurashiki on October 14 with an opera singer. I wonder if they will have someone filming tour footage, because this has Spinal Tap written all over it.

Miho also has a scan from a magazine called "Heat" (I've never heard of it) that has a look at Keanu's hairstyles through the years. You can see it in one piece over at 999.squares, I broke it down for commentary... 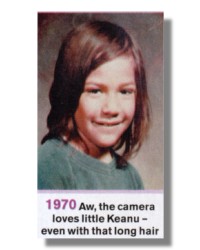 Behold the power of cute. I see that even at 6 years old, he didn't use a comb. I love how he's bitting his lower lip. He definitely would have been one of the boys I chased and kissed on the playground. 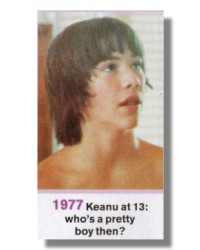 WTF? with this caption? It's obvious even at thirteen, he's destined to be a heartbreaker. 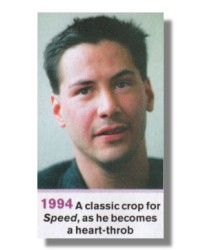 Skipping ahead 17 years, you wouldn't think he could make such a short haircut look disheveled, but he does. And as always, it works on him. 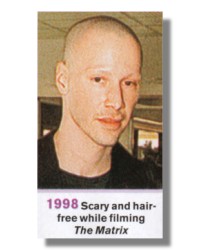 Scary? Not. As I've said before, I find this look really sexy. 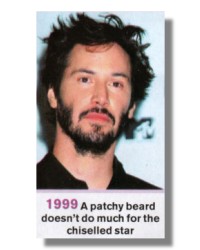 Says who? You wish you could roll out of bed and look this good. 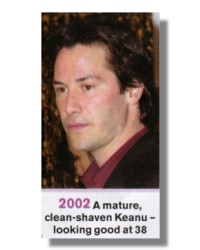 Yes, he does clean up nicely. And as beautiful as he was 10 years ago? He gets better exponentially with age. Like a fine wine.
A while back there was some article saying that once his looks "go" (I don't think they ever will) that "fans" will discard him for some other pretty boy. Maybe some will, but personally, I think I will adore him even more at 45, 50 and beyond. Because although he truly is beautiful to behold, he's so much more.

I love those early pics, but he is definitely getting better with age. And in my opinion, the fact that he's physically beautiful is just icing on the substantive cake. I've always known he was beautiful (well, at least since I saw him in River's Edge in 86), but it wasn't until I read that wonderful Vanity Fair interview (Jan. 01) and learned all about him that I was so totally smitten. *sigh*

Posted by: keanuette on August 14, 2002 10:46 AM
What's on your mind?.....
(new here? please read this before commenting)
Remember, this is a fan site.
Keanu Reeves is in no way connnected to this website.
Please do not make a comment thinking he will read it.
Comments are for discussion with other fans.
Thank you.