OK...according to this link (via reeves drive) it apparently is "confirmed" that Keanu will play John Constantine in the upcoming Hellblazer movie. The Superhero Hype article cites this as its source, but when I went there, I didn't see anything about Keanu.
One thing that I did see is that many of the Hellblazer fans over at Superhero Hype's forums are none too pleased about Keanu playing their beloved Brit hero.
Refreshingly, most have well thought-out reasons beyond "Keanu Sux0rs!"


"Listen, for me this is not a matter of bashing Reeves. I actually kinda like him in The Matrix and The Gift. It's just that he's WRONG FOR THE PART! Constantine is this cynical, streetwise, carved-by-life character. You have to look at him and be able to say, "gee, this guy went through some really tough times". I don't think Reeves has the looks, attitude or acting style that fits this character."

Then there's this gem:


"Hate to break it to you man, but your English accent sucks."

"I think my accent is good."

"Look, I didnt want to tell you this, but it's Keanu Reeves bad."

He does have his defenders.


"I'm going against the majority here, but I think it's a fine choice. After the HUGE success of the upcoming Matrix sequels, he'll be a major money maker for this project. Just take a chill pill and give him a chance. He's not a bad actor, you're just buying into all the critics bull****t. I look forward to seeing him in this movie."

As I understand it, the "Hollywoodization" of Constantine began way before Keanu got involved, and fans of the character are already annoyed. This just adds fuel to the fire.

Personally, I've decided that I would like to see Keanu in this role. While the movie Constantine may stray from the original, those who don't have a predetermined concept of who he is supposed to be will enjoy it.

And if he doesn't do the movie, there are thousands of lesser-known superheroes that are just dying to be made into a multimilliondollar picture. 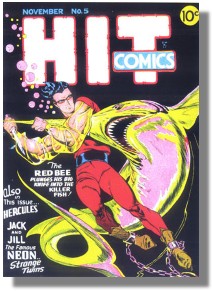 I'm not even going to get into the "The Red Bee Plunges his BIG KNIFE into the KILLER FISH!" innuendo...

(Red Bee babble inspired by some comments over at billegible.org)

I am not a big fan of comics. To be honest I have not read enough of them to pass judgement other way.

But, looking at that Hellblazer link, and knowing that Keanu is a comic books fan, doesn't this seem like just the thing he would want to do?

I mean, comics impress me as being on the fringe, kind of punk, and the writers willing to go down the road least traveled. Kind of like Keanu, if you can believe anything you read about him, I mean.

When I was little, I spent every day in the back room of my dad's little market while both he and my mom worked. I had a little room made out of boxes of canned goods etc and all I did was hide back there and read comics. Mostly Richie Rich, Archie, etc., never superhero or "scary" ones. I pretty much lost interest once my age hit double digits. I never got into the more sophisticated "graphic novel" types, although I did buy the MAUS box set last year, and I now have a few Bill and Ted Marvel(?) comics. And of course, the 2 Matrix ones.
I'll probably look for a few of the Hellblazer series once it's *really* confirmed that he's doing the picture.

kaz - but of course.

No, I say no! I'd rather see him as a second generation Billy Jack any day. Isn't Neo superhero enough? (though I think keanu would make a better Daredevil than Ben Upchuck...er, um, Affleck). Of course, having said all that, if keanu is Constantine I'll read the comics and see the film (probably numerous times). Mainly I just want him to tour with Dogstar for about a year, and they should come play on campus at Clemson at least once a month. OK, time to stop babbling now...

I'm not sure I like Keanu playing Constantine either. Not that he can't pull it off, but, hm, I've read the comics and casting Keanu just seems, somehow, wrong. I can't explain why, but I'll think about it and get back to you all later...

Is he turning down Billy Jack for Constantine? I certainly hope not. I was very much looking forward to seeing that.

I think what I really want is just to see him with the blonde hair.

Posted by: Lori on August 3, 2002 09:09 PM
What's on your mind?.....
(new here? please read this before commenting)
Remember, this is a fan site.
Keanu Reeves is in no way connnected to this website.
Please do not make a comment thinking he will read it.
Comments are for discussion with other fans.
Thank you.