In an effort to put off figuring out my taxes for another day, I've decided to occupy myself exploring the very superficial question...

Does Keanu Dress Left or Right?

This page says that typically, most american men "dress left". It's so common, in fact, that most men's suits are actually tailored with a little extra room at the top of the left leg. Isn't that an interesting little bit of trivia?

However, Mr. Reeves is hardly ever "typical" (I believe he's also considered Canadian, which may or may not be significant in this study). 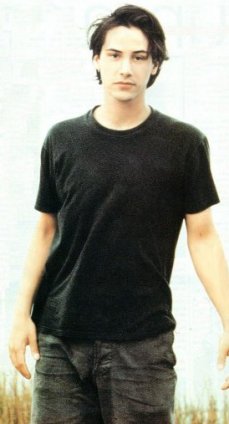 He's so sweet and young here. Now, there's a weird fold thing going on with these pants though, but it would seem that in his younger years, Keanu dressed right. But, so many things can change as one matures. I decided that more research was required. 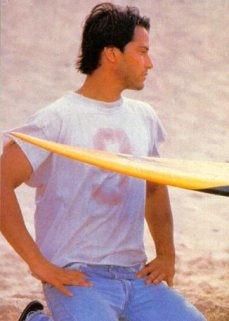 AH! Faded jeans are your friend. Positively...umm, compelling "to the right" evidence here... 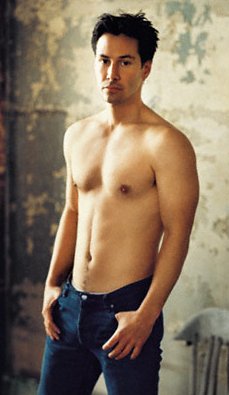 This picture from Rolling Stone is a bit too dark for research purposes, but damn, it's a nice one, isn't it? 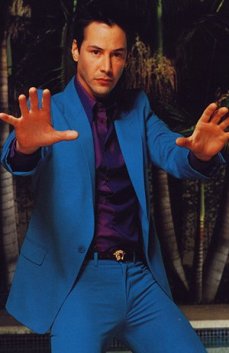 If he had a quarter in his pocket we could read the date. I find this picture further supports my original hypothesis.

So, my research shows, thus far, that Keanu Reeves dresses to the right.
Of course this shall be an ongoing study, and I welcome your contibutions of photographic or other (!?) evidence to support or refute this claim.

It's purely academic, of course....

Are you still accepting research pics for the dressage revisited report???

I know this is an older pic but I just came across it on Chick's site...

Greetings from Germany, take care, luv your site, it's hilarious!

I would have to agree with you krix on your observations.......you only have to glance at the pic's to figure it out. (blush) And thats all I am going to say about that. :)

Posted by: Toriane on January 22, 2004 10:24 PM
What's on your mind?.....
(new here? please read this before commenting)
Remember, this is a fan site.
Keanu Reeves is in no way connnected to this website.
Please do not make a comment thinking he will read it.
Comments are for discussion with other fans.
Thank you.