Speaking of groupies, it's been WAY too long since the last Dogstar show.
Hey Domrose! Throw us a bone, eh? Solo show? Something?
Ah well, at least I have my memories.
Here's one. 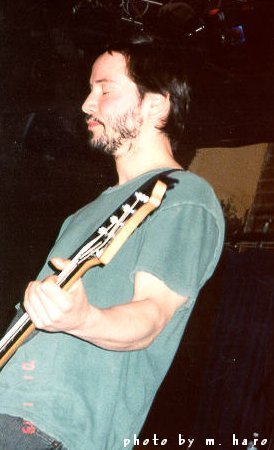 This pic was taken by my good friend and frequent road trip partner, Maria at a benefit concert for The Garden Nursery School in L.A. on Jan. 18, 2001.
It was a fun show. A little short, and there weren't a whole lot of people at the club. So it was very laid back and casual. Bret even came out and talked to a bunch of us before they went on, and Rob was wandering aound, too. Keanu kept backstage, though. I heard from some friends (that were at the club early and had a chance to speak with him) that he was pretty sick that night. The blonde must have been his nurse. *snark*
But all in all, it was a great benefit show for a good cause.