free to explore and be adored 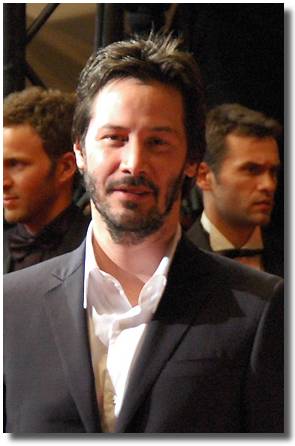 Keanu Reeves In Slow Mode
~By RON DICKER, Special to The Courant
With Two In Release, Actor Looks For Right Movie

CAP D'ANTIBES, France -- Hearing Keanu Reeves imitate a Jewish grandmother might surprise you. Hearing him talk about staying in one place is downright shocking.

"Oy, you get older, you want to settle down," the famously itinerant actor says, sounding more like a bad Catskills comic.

Reeves, 41, is in a place that many of us would like to be: stinking rich - thanks to his 15 percent take of "Matrix" sequel ticket sales. He has not worked in a year, content to watch the fruits of his labor hit the screen this summer: the time-travel romantic drama "The Lake House" on June 16 and the sci-fi adaptation of "A Scanner Darkly" on July 7.

In the meantime, he spends his days weaving his motorcycle through the canyons near his permanent Los Angeles home and reading the likes of Thomas Pynchon. He quit his band Dogstar because the other members wanted to tour. He has no work planned. He doesn't need a job. The "Matrix" trilogy netted him more than $100 million.

Maybe it's the salt air wafting off the French Riviera at the Hotel Du Cap, one of the most elegant settings in the world. Or perhaps it's his pride at attending the recent Cannes Film Festival for the third time. "It's a big deal," he says.

He seems to have transcended his cosmic surfer boy image to an even more positive plane. It is a stage that perhaps his alter-ego Ted from "Bill and Ted's Excellent Adventure" might never have comprehended.

Reeves remains inscrutable during this chat in a cliffside ballroom overlooking the Mediterranean. Freshly shaven yet a tad puffy, Reeves doses out small bits of misdirection in between the sincere answers.

But he seems darn glad to be here. He is no longer wed to a film franchise, making him free to explore and be adored and dissed all over again for what some see as stiff acting chops. He will never be invited to teach a Juilliard master class, but he will always be invited to the party.

"Artistically I hope to be able to make films that entertain but also that have redemptive qualities to them," he says. "I'm anxious to see what happens next."

Which brings us to his latest. "The Lake House" reunites him with "Speed" co- star Sandra Bullock as loving pen pals who discover that they are living two years apart.

"It's a little older, a little more mature in terms of leading romances I've had in a film," he says. "It's a sweet romance. Love is good."

"A Scanner Darkly," which Reeves accompanied to Cannes, gave him another sci-fi platform. He landed with a thud in "Johnny Mnemonic" then floated on the mass-market phenomenon of "Matrix," which served deep-dish philosophy on a video game platter.

Reeves says he liked the concept of government and business colluding to seize control from citizens. It's "a carnivore aspect" with his character Bob Arctor as the "sacrificial lamb." Reeves scrapes the comment off the top of his head. However, his approach to the role was far more deliberate.

"He's the kind of guy who will call you at night because he's been up thinking about it," Linklater says. "He really digs in thoroughly to what he's doing. He has two gears, and all I saw was the `on' gear."

To some observers, Reeves has operated in neutral through much of his moviemaking life. As if he skated from his hockey playing youth in Toronto through a few arty films such as "My Private Idaho" to mainstream ("Parenthood") to action hero ("Point Break") just by being Keanu. Reeves tried to make it look that easy. He was self-deprecating to a fault, and invited lunkhead perceptions.

Not these days. He says he would like to direct if the right project comes along. "I know it's [going to]be really hard, but I like that." And he would like to return to the stage. "It would either be Shakespeare or a modern play. I don't want to do Brecht." (He played Don John in the Kenneth Branagh's 1993 film version of Shakespeare's "Much Ado About Nothing.)

As for his personal life, Reeves remains a sphinx. Fleet Street gossip last year linked him with Diane Keaton after he broke up with "Lake House" castmate Lynn Collins. (Keaton and Reeves were onscreen lovers in 2003's "Something's Gotta Give.") And murmurs about Reeves and Bullock when they attended the Oscars together in March were just murmurs.

But somewhere in the "settle down" part of the conversation was the hint of something permanent - either now or in his heart's desire.

As Reeves' fictional Jewish grandmother might tell him, "From your mouth to God's ears."

take a break, keanu, babe! you work so hard, and you deserve it! still, i'm looking forward to the two new doses of you we'll get this summer. thanks for this, krix!

keanu,keep happy and healthy
I will support you all the way around,fighting*!*

what's the deal w/ his calendar, it hasn't been updated since March?

hey, did you read april palyboy????
5 sheet about nothing! he did it again!
the only new one (for me) was, that he want to be american. c´mon man, don´t be dude!

ya, and i enjoyed them, but 5 sheet? it is wasting! and btw i prefer editress :)

Posted by: vika on June 12, 2006 12:40 PM
What's on your mind?.....
(new here? please read this before commenting)
Remember, this is a fan site.
Keanu Reeves is in no way connnected to this website.
Please do not make a comment thinking he will read it.
Comments are for discussion with other fans.
Thank you.