he's my power animal too

From the Orlando Sentinel: 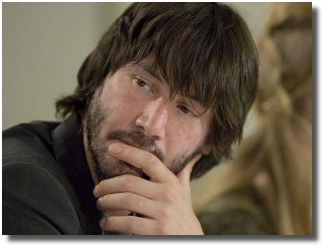 The incredible Zen of Keanu
Reeves takes on the role of a New Age orthodontist in 'Thumbsucker.'

That's what Keanu Reeves is.

That's the public face he puts on for journalists, the folks who long ago tagged him perma-dude, the actor with the cool name and surfer-dim vocabulary.

You don't get much out of him in interviews. Sometimes that's because he doesn't have much to say. But sometimes, it's because the press, even in small group settings such as this one, can't resist riffing on the first fragment of whatever he wants to say. He never gets to finish a thought.

Then again, there's a reason the small studio releasing the indie Thumbsucker, which opens Friday, has paired him with his director, Mike Mills, for interviews. And it's not just "that the movie isn't about Keanu," as the publicist says. Mills, a first-time filmmaker from the world of graphic design (think album covers), is here to fill in the blanks that Reeves leaves between thoughts.

But really, the guy is perfectly capable of expressing himself. And if people are saying that his odd, New Age guru/orthodontist in Thumbsucker is the role he was born to play, he'll run with it. A little.

"I liked his richness of feeling," says Reeves, 41. "I don't know how else to describe it. No matter what he was doing, he felt it. He just seemed so open."

If the ortho-doc seems like an adult, self-mocking version of the "Whoa, dude" Reeves we've all grown to expect, well, that's not his fault.

"I didn't think I was doing that in this role," he says, scratching his scruffy 20-day-plus beard. "But maybe I'm naive."

That gets a laugh, as does his take on the stardom that seems to have sat in his lap for the past 15 years.

As does his co-star, Tilda Swinton, who shepherded this project about a functionally dysfunctional family (she plays the mom) dealing with a potentially brilliant 17-year-old who still sucks his thumb (Lou Pucci).

"I kept a poster of Keanu in The Matrix on my wall throughout the whole preproduction of this film," she says. "I knew if he stayed with the project we might actually get it made. He was my 'power animal.' "

Reeves had the good taste to see, in the script from Walter Kirn's novel, a good movie. He wouldn't be the star. He wouldn't rack up a Matrix or Constantine payday ($15 million plus), or the perks.

But his name would get it made. And it did.

"The humanity of the piece, the humor and insightfulness, and intelligence, they were what I read, and what I experienced when I got to see what was on the screen," Reeves says. "I'm really happy with the film. In terms of my hopes and expectations, they were realized. It's a great role, and I had a great time performing it."

Mills says that Reeves, who has for years earned several times more than the entire budget of indie films such as this one, doesn't do "the star thing." Especially on the set.

"He never, with words or anything else, said 'I'm special or different' and never asked for anything special," says Mills. "Working with Keanu is like working with one of my electricians or the grip or anybody. The worst thing you could do was pay too much attention to him."

It's a dream project for Mills, who came to see it as his own story. It's a breakout piece for young actor Pucci.

And for Reeves? He picks up some of his best reviews. And he returns to the city where he grew up (Toronto), in triumph.

"I remember I saw Blood Simple here, which was the first time I ever experienced the Toronto Film Festival," Reeves says. "What was that, in like 1983 or something? 1984? Far back. Years ago, anyway.

"I saw this incredible festival, from that angle, growing up here. I remember, from that time, just waiting for that film festival guide, and every year, you'd go, 'Oh my God, there are so many incredible movies here!'

"And then to be here and have a film here is just exciting, no other way to put it. I remember the first time I came here as an actor, it was for Prince of Pennsylvania [1988]. I'd always wanted to act 'in pitchas.' To finally get to do that, and to come back to the hometown for a movie, was a really good day."

"Johnny wants to self-realize," Reeves says of that role. "But there's all these boxes that he's put in. And I think he's trying to get out of them.

"I always think of him as kind of a beauty and the beast. He wants to be more than the brute."

Kind of like "the dude" who wants to be more than the dude?

"Hey," he grins, readying his stock answer for every "Why choose that role?" question. "I was just looking for work."

"I can't deal with other people's idea of who I am supposed to be."

I wish we could all remember that, myself included.

"HE'S MY POWER ANIMAL TOO"

the matrix is everywhere -- note the name of the newspaper... sorry, just couldn't pass it up! ain't it cool when he gets his due?!

Taste and judgement. Humour, modesty, support for a project that arguably would not have been made without it. Ambition past nothing other than being part of the team and telling the story. The consumate professional and - into the bargain - the most gracious guy in the business.

And the most beautiful hands and voice.

...me six...
and I also like the city. I was in Toronto long time ago ( pitty no film festivals) and enjoyed it.

Posted by: christelle on October 8, 2005 05:40 AM
What's on your mind?.....
(new here? please read this before commenting)
Remember, this is a fan site.
Keanu Reeves is in no way connnected to this website.
Please do not make a comment thinking he will read it.
Comments are for discussion with other fans.
Thank you.