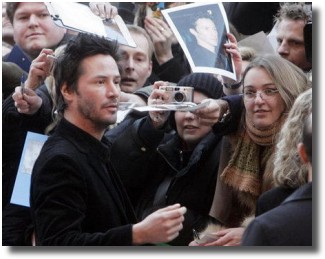 Keanu's now in Berlin, for Berlinale (film festival). I believe he's pulling double promotion duty for both Thumbsucker and Constantine.

The lovely Petra sends a summary of the Thumbsucker press conference...


"The press conference lasted about 30 minutes. Keanu attended, along with Lou Taylor Pucci, Mike Mills, Linda Swinton and two of the producers.

The first question was if they had had any childhood nicknames.
Keanu said he had "a couple of nicknames [...] Kiki" - he repeated this once or twice, as if he was trying to choose one, and then said: "I'll say Kiki."

Another question to Keanu was about his impression of Berlin and whether he speaks any German. He didn't answer the first part of the question, but he started speaking German! "Morgen, Morgen, nur nicht heute, (sagen?) alle faulen Leute." ("Tomorrow, tomorrow, please not today - this is what all lazy people say.") His pronunciation was actually quite good! After a short pause, he said: "Ich liebe Berlin." ("I love Berlin.")

He was also asked what it was like to play a dentist, after all his other performances in The Matrix, Constantine etc. Being a dentist is an awful profession...
Keanu said he should ask Lou what it was like, and then said what we read before somewhere, that he nearly poked Lou's eye out.

Another question: it's an ususual story - what got you into the story, why did you say 'yes' to it?
Keanu replied that he agreed with Tilda - sorry, I didn't write down what she said and as soon as Keanu started speaking I at once forgot everything Tilda had said. Keanu then said it was the script, and meeting Mike Mills. The interaction between the child and the parents, the child's development. He met Mike, and what with the script - he basically said "when do we shoot?" as soon as he met Mike.

Part of the next question was about doing "equal justice to the perspective of the boys and the parents". Keanu said: "Perry is kind of an orphan", who is giving mentoring, advice. Advice "that he collects on his own way", when making his own experiences.

Keanu was then asked what it is like to be on a festival tour 24 hours a day, first Sundance, now the Berlinale - and does he have a survival kit?
He answered that his survival kit is "being with the people you made the film with". He talked about the experience of "being part of the film", and that it's a privilege, and that this is the main thing during such a promo tour.

Another journalist asked them whether they had any particular philosophy in life.
Keanu said we all have teachers, coaches. And there are the people he worked with. And a particular philosophy - he is still "figuring it out", "learning", "life experience". Then he said, in a special tone, that the had "not found THE ONE [philosophy] yet", repeated this, and added, after a short pause: "Do you"?

Keanu was then asked whether he likes going to the dentist. He said: "I love the dentist, I love the shot in the gum for half an hour." (I'm not sure whether there was something else here.) "I love what dentists do - it's fantastic."

Another journalist talked about low-budget movies, said that a few of them are shown at the Berlinale tomorrow, and what does everybody think about low-budget movies in the US, and are they interested in low-budget film productions in Berlin?
Keanu: "Of course!" He said that it's "just about telling stories", "that's what we love to do", "no matter what scale", and that the main thing is "just to show..." [the work].

That's about it. There was another question, and I heard the journalist mentioning Constantine, and I could see and hear Keanu talking to the
others, but I couldn't hear what they were saying. My impression was that he did not want to answer a question about Constantine at a Thumbsucker press conference, but I may be wrong.
I also loved what Lou, Linda and Mike had to say. At one point, there was quite an animated conversation going on between them and Keanu. They were talking about improvising, and Keanu asked whether a certain line was improvised. My impression was that the cast and crew got along very well, that the atmosphere at the set was very relaxed and big fun (Tilda confirmed that early on), and that Keanu really likes this movie and supports it as much as he can."

Kiki is our "term of endearment" for our kitty cats. lol
I have read in the past his sisters called him Kiki when they were small; perhaps they still do - how cute is he that he would let the world in on that tidbit.

Thanks for the summary Petra. Thanks for posting it krix. Great read.

woah, petra I lost your email-address. Sent me an e-Mail please and buy the new 'Maxi', it's an interview in it (old pictures). Haven't read it so far... ;-)

well... keAnu remains my total inspiration...
the reason im getting in such good shape again is becasue of him... i didn' realize how much focus, stamina, energy, balance, love, and i'm sure there is something else...
it takes to gt thre and stay there...
sometimes my body which is under some stress is kindof forcing me to get additional sleep.... usually i don't need so much.. but the pressure
anyway.... i just thinky of him and life is wonderful again!

You know what would have rocked?

On second thought, maybe not.

Posted by: Tabitha on February 14, 2005 05:47 AM
What's on your mind?.....
(new here? please read this before commenting)
Remember, this is a fan site.
Keanu Reeves is in no way connnected to this website.
Please do not make a comment thinking he will read it.
Comments are for discussion with other fans.
Thank you.