yet it does not rhyme with valentine 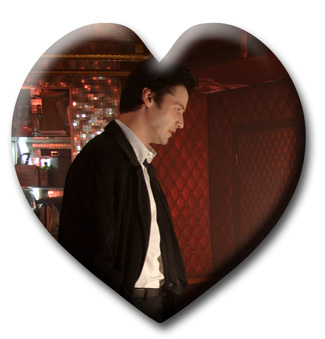 The Heart of CONSTANTINE

Keanu Reeves starring in a big, dark fantasy movie. Hmm, where have we seen that before? Well, there were JOHNNY MNEMONIC, BRAM STOKER'S DRACULA and THE DEVIL'S ADVOCATE. And let's not forget the smaller-scale THE GIFT and THE WATCHER. Oh, and how could we forget THE MATRIX and its sequels, RELOADED and REVOLUTIONS? Now Reeves is at it again with CONSTANTINE, based on the DC Comics/Vertigo series HELLBLAZER and opening from Warner Bros. February 18. Reeves stars as John Constantine, who's dying of cancer and desperately trying to stave off his destiny: having attempted suicide in his youth, and actually dying for a couple of minutes, he's doomed to hell. And so he's on a crusade, dispatching the half-breed demons that breach our earthly plane back to where they came from.

However, all hell's breaking loose on Earth. Demons, not just half-breeds, are trying to break through. A troubled but deeply religious woman, Isabel (Rachel Weisz), has just apparently committed suicide, and her sister, Los Angeles police detective Angela Dodson (also Weisz), doesn't buy it. And so she and Constantine join forces - interacting along the way with Satan (Peter Stormare), Gabriel (Tilda Swinton), Balthazar (Gavin Rossdale) and other allies, enemies and freaky creatures - to save themselves and, quite possibly, mankind.

"I first came across the script when I was working on THE MATRIX in Sydney, Australia," Reeves says, "and I read it and really enjoyed it. I guess from my first reading to principal photography, it was over a year and a half. In terms of making choices, it's about trying to have a kind of variety of genre and character. But I said yes to it while I was doing THE MATRIX because I didn't feel I was repeating myself. John Constantine is a very extroverted role. And so much about it was very different to me from the experience I was having in [the MATRIX movies], but it was still a great script, a great idea and a great character."

Reeves goes on to note that pre-CONSTANTINE, he was not familiar with HELLBLAZER, and thus didn't know that the comic was set in England or that Constantine himself was British. By the time he received the screenplay, those elements had already been changed. "When I read the script and then familiarized myself with the work, I saw that what was important was really the essence of Constantine, and we worked really hard to keep that aspect," Reeves explains. "He's kind of hard-edged, hard-boiled, world-weary, cynical, fatalistic, nihilistic, self-interested - with a heart. And I think we preserved that. I mean, I hope so. I hope that fans of the comic don't feel we sabotaged something that is so well-loved."

During publicity rounds on behalf of CONSTANTINE, several of Reeves' co-stars have spoken of his preparation efforts and how he kept journals chronicling the various sides of spirituality. Reeves, however, guns down such chatter. "They have no idea what they're talking about," he says. "It's just in the process for me - writing things down, thoughts for working on the role. I wasn't carrying around THE WAY OF THE PEACEFUL WARRIOR, in that sense. I believe the film speaks for itself in a way, and that's really what I was working on. If I had anything like that, it was the script for CONSTANTINE and the journey that character takes, learning about this kind of curse that was given to him as a kid. ''A gift,'' another character says, but Constantine doesn't see it quite like that. Part of the journey is Constantine understanding his life and the circumstances, and he comes to a kind of ambivalent peace of sorts."

Helping him embody the character, Reeves explains, was his outfit. He recalls visiting the wardrobe department, rifling through a rack of clothes and trying on assorted pants, shirts and shoes. "There was a concept for the piece," he says. "What clothes fit? It was like trying on the hat -'It's this one.' And I found that moment. I remember putting on the jacket and the shoes and I felt a certain way: 'Yeah, this is Constantine.' When you go to rehearsal, you wear your wardrobe, and eventually I find that not only do I have a feel, but they seem kind of connected, natural. When that happens, it's great.

"So I kind of knew his core, but in terms of embodying the character, I also lowered my register a little bit, working on the way he spoke," Reeves continues. "I was guided by Francis Lawrence, the director, in terms of wanting a kind of hardboiled feeling and guided by the comic itself - a kind of noir aspect. And that has certain traditions I wanted to utilize, especially with his humor, that kind of deadpan. When did I know [I'd nailed it]? It kind of happened a couple of days before I shot. The exorcism was the first scene, and that helped a lot, too. When I walked from the window and got on the bed - 'How do I get on this bed?' And when Constantine stands up and walks over, it's like he's trying to step over a puddle. I was like, 'OK, I've got it.' "

Reeves is due next in the comedy/drama THUMBSUCKER, in which he has a supporting role. He's also got his role in Richard Linklater's A SCANNER DARKLY (an animated film based on the novel by Phillip K. Dick) in the can and a reunion with SPEED star Sandra Bullock in the works. At some point, if CONSTANTINE gives 'em hell at the box office, it would surprise no one to see CONSTANTINE 2 put in motion. Reeves, though he doesn't mention the MATRIX follow-ups by name, knows full well that sequels don't always live up to expectations. "Well, we'd better not do that because that would suck," he says. "You know, my contract didn't have a second film [required], but myself and some of the producers and Francis Lawrence certainly would [consider another Constantine adventure] because we fell in love with the guy. I had one of the best times I've ever had working on a film, working on this particular project.

"So, we would talk about what we could do. 'What happens to Constantine?' He's a heroin addict in Morocco. He's got a spell. He's killing people and he's trying not to kill people, so he's knocking himself out. Then [CONSTANTINE co-producer] Akiva Goldsman was like, 'No, he wants to stop Revelations.' So we would discuss those kinds of things. Ultimately it's up to the audience, because that would mean that the studio would have the resources to go forward with it. But I would love to play Constantine again as long as I worked with the same people, Francis Lawrence and Akiva Goldsman and everyone involved in this project; I couldn't imagine doing this without them involved. I love playing the guy."

Mention the possibility of a CONSTANTINE trilogy, however, and touch of sarcasm slips through. "Trilogy, why stop there?" Reeves jokes. "We could have SON OF CONSTANTINE. And I'll play him too. CGI. Who knows? I mean, probably by the 30th [of February, after CONSTANTINE is out for a couple of weeks], we'll know. But also, I'm sure that after this film, because he did such a remarkable job, we're not going to be able to hire Francis again. He's gone."

Don't even get me started about the mispronunciations. As the marketing moves into overdrive, (adverts on Cartoon Network? Boomerang? I'm trying to watch Tom and Jerry here!) it's driving me nuts.

i am fully supportive of keanu an his choice of roles.. they must have doen a really excelelnt
job with this cause i think it's scary...
some pix are scary... the story is dark...
this particular subject matter has always been
high alert for me cause i'm a little clarevoynat my self.... sensitive to the protective needs of
theman keanu...

wait.. keanu gets on a bed!!!!
no wonder it's IS constantine for valentines!!!!

All this press has churned me into a frenzy I tell ya! I gotta get off the computer and work on my meditation or housework or dinner.....right after I check for new pics!

The mispronunciations drive me crazy too. Some people just don't want to accept dictionary pronunciations as accurate, even though they've been told over and over again they are pronouncing it wrong. Why do they do this?

Posted by: wanda on February 10, 2005 04:58 AM
What's on your mind?.....
(new here? please read this before commenting)
Remember, this is a fan site.
Keanu Reeves is in no way connnected to this website.
Please do not make a comment thinking he will read it.
Comments are for discussion with other fans.
Thank you.