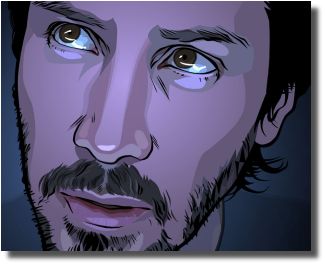 AICN has the first hi-res images from A Scanner Darkly.

Also, freezedriedmovies.com has another image (from Premiere)
Thanks Ale!

He oozes sexuality even as a "cartoon."

Keanu puts the anime in animation!

Yeah these are really amazing! Although TBH I liked the Premiere image better... maybe because it was smaller it seemed more like a painting and less like a graphic novel. These images look more like Waking Life than I'd expected.

Still love 'em! and yeah...even his drawn self is HOT!

How about AND, krix!

Anyway, I hope this is a better PDK adaptation than Paycheck. I'm still bitter about that.

I vote for the mural!
Those beautiful BROWN EYES....*thud*

The lower back area will be nice for the tat....

Maybe these last images are "pre-visualizations" like story boards. I agree the Premiere pic looks like it is animation from the film where the last three from AICN look like they are full on "illustrations."

Tabitha, I think you can count on a better adaptation. Keanu is a big big PKD fan and if you read that Premiere article you know that Keanu was always going to the director with information.

This animation is amazing! Look how they captured his eyes perfectly here. He is equally beautiful even as a graphic novel.

not only beautiful but also gifted and talented...

every day i can't believe my eyes at what an amazing person this guy is... but he himself has said he is mickye mouse and no one knows who is in the suit...we just see through the scanner darling...

but he sure looks good in that suit!
and i muse this thought(i've needed some rest so as to not get more sick from the flu!!!( ))))
it takes a very strong person to allow your self image to change with each character one plays...

OMG!! and we have to wait till September for the whole movie!!. Don't know who the animator is..but they did a fantastic job.

yes they really did do an awesome job, even down to the detail of getting the patchy spots in his beard. this is about the tenth time today i've come back to gawk... !

i saw waking life and really liked the animation style...can't wait to see this!

I still can't get over how cute he is as a cartoon!

Oh, and I'm definitely going for the mural. Because it goes with the "purple haze" colorstrology color I picked out for my bedroom...hee. Remember that link for making GIANT posters? I'm just sayin'

i remember that link! great!
i think i got permissionitis but i didn't see where you could make giant posters... or was that a different link...

This man looks so f..licking good in anything and everything!

I love these pics all of them and can't wait for the movie(s) to hit the big screen!

Mural, imagine waking up and seeing it every morning.

OMF is right! OK, I've really lost it ... melting ... looking at a ... cartoon! Those cartoon eyes, those cartoon lips! *drool* The animation is amazing.

nudel, if you're painting your room purple haze, you MUST go for the mural to match. Coincidence? I think not!

Here's the link krix found for the rasterbator:

I've been playing with it *wink* but so far it hasn't produced anything with a small enough dot size and with the proper colors :(

If somebody else has more experience with this let me know. I set it for vertical US letter paper, and the smallest dot it would let me use was 7mm which is pretty big. When I looked at the PDF it had dropped out a lot of the colors...

Apparently it might be possible to do this in Photoshop. I haven't found it in Elements though. :(

This cannot be done in Photoshop, according to photoshop tricks & tips website. However it can be done in Quark, Pagemaker, or InDesign. Since I *cough*have access*cough* to both Quark & Pagemaker on my computer at work, I'll see if I can teach myself. I know our designer has to do this to print some of our fullpage ads and she complains vigorously so it must be hard to do. :( Otherwise the photoshop folks said kinko's can do it.

So I may decide to live with my rasterbated image.

it looks definitely like the right color for this year, doesn´t it?
...great masterpiece of pop art!!! i want it 2 meters(or 7 feet) size...

ok krix so where do I email you?

Posted by: Damaris on January 8, 2005 04:17 PM
What's on your mind?.....
(new here? please read this before commenting)
Remember, this is a fan site.
Keanu Reeves is in no way connnected to this website.
Please do not make a comment thinking he will read it.
Comments are for discussion with other fans.
Thank you.