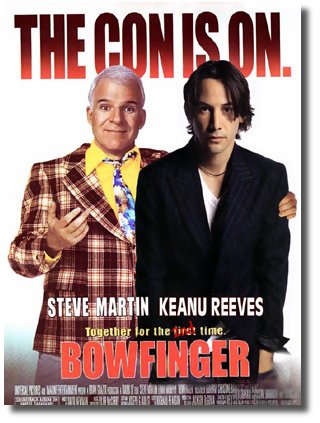 Keanu's Parenthood co-star Steve Martin will be honored with an American Cinematheque Award tonight. I lurve Steve Martin. I used to have an 8-track (yes, I'm that old) of his first comedy album that I completely wore out. He's such such a great versatile actor, author and seems like generally a hell of a guy. Plus, the white hair does it for me in a big way. *swoon*

The Hollywood Reporter has an article that includes this little bit of trivia...


The following year, Martin starred in the hit comedy "Parenthood" produced by Grazer, who went on to produce the Martin starrers "Housesitter" (1992), "Sgt. Bilko" (1996) and "Bowfinger" (1999). Of the latter film, Grazer notes: "When Steve gave me the (Martin-penned) script for 'Bowfinger,' it wasn't written for (co-star) Eddie Murphy -- it was written for a white action star. It was written for Keanu Reeves, literally. I said, 'Why does it have to be an action star?' He said, 'That's the joke.' I said: 'What if it were Eddie Murphy, and Eddie Murphy played two characters? That could be really funny.' He said: 'You know, that'd be great -- that'd be brilliant. Let's do that.' He processed it in about a minute, and he made a creative sea change."

It's been ages since I've seen Bowfinger, I might rent it again to imagine what it may have been like with the original premise.

Well excuuuuuse me! I can, if not beat your eight track, at least meet it. I have all his albums, and the book Cruel Shoes, a first edition. How old am I? ;)

If Steve would collaborate with Keanu, I would surely get a case of happy feet. He has a film in the works called "The Pleasure of My Company" based on another book of his, and Keanu would be perfect for the lead IMO.

My own personal bestest Steve moment on SNL - dancing with Gilda Radner.

I just read that this morning and thought...time to rent Bowfinger! I'll be doing the same imagining. Gawd I'd love to see them in a clever, funny movie together. I know Reeves could do it...

Hee! I had a copy of Cruel Shoes too :)
And Oooo, thank you for reminding me of Steve and Gilda dancing, yes great moment.

steve one of my fav's too... after keanu of course!

"be obsequious, purple and clairvoyant
get all excited and go to a yawning festival..."

yes, i too had a Steve Martin album which i completely wore out (see above for my all-time favorite lines from a song on the album). he's a comic genius. to see him with keanu would be loverly.

I've watched "Bowfinger," the premis is a hoot! But I have always prefered Steve Martin in LA Story myself. Sometimes I rent it, or watch it when it comes on TV.

I don't remember Bowfinger but I did see Steve Martin in NYC and the Blues Brothers opened for him. Must have been the 70's. Yikes.

Wow! Keanu and Steve together? That would be great! A perfect combo. I also own a copy of "Cruel Shoes". Saw "Bowfinger" once on TV. Enjoyed it very much. Was Robert Downey Jr. in that too?

God lori! My very favorite line too! I use the word obsequious in conversation and most people dont know what it means - HA! -
I also still have his first album Lets Get Small!!


Posted by: krissy on November 13, 2004 01:37 PM
What's on your mind?.....
(new here? please read this before commenting)
Remember, this is a fan site.
Keanu Reeves is in no way connnected to this website.
Please do not make a comment thinking he will read it.
Comments are for discussion with other fans.
Thank you.