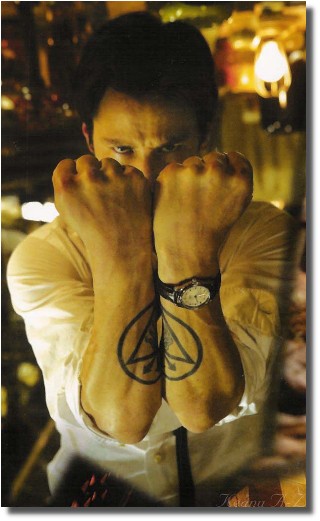 AICN has a gushy and spoilery look at the Constantine footage that was shown at last week's Wizard World geekboy hoedown:


"The big event for movie buffs was the appearance of Francis Lawrence, director of Constantine, with an 18 minute (!) preview of the movie. There were a lot of scenes, obviously, in this puppy! At this point, I think any of my doubts have been erased. Forget that Francis Lawrence is a video director - this movie has the slow pace that a good horror / supernatural thriller flick needs. It's dark, it's creepy. Keanu seems to have nailed the essence of John Contantine (a self-centered A-hole magician), and there were a lot of good creepy moments in the preview."

And a report on the panel discussion on Hellblazer and Constantine from Comic Book Resources:


With a "Hellblazer" film on the horizon both in preview form during the panel and in the coming year, talk turned to the goings on with that character and related titles.

Among some "Hellblazer" trades being ramped up for release and the previously announced "All His Engines" graphic novel by current series writer Mike Carey and artist Leonardo Manco (in which Constantine visits Los Angeles) a new mini series was announced.

A five issue limited series centered around the character of Papa Midnight is on the schedule to be written by novelist matt Johnson. The character of Papa Midnight was introduced early in the "Hellblazer" series and is featured in the Constantine film. Art will be provided by "Fables" artist Tony Akins. The story revolves around an actual incident in 18th century Manhattan in which there was a rebellion of slaves.

When the floor opened to questions, an interesting idea was proposed by a con-goer. Given that Azzarello is primarily a Vertigo writer but also handles "Superman," the concept of a Vertigo story featuring Bizarro Superman was floated to the writer. Without missing a beat, Azzarello responded "Me am not adverse to that."

Asked if any characters currently in the regular DC Universe would be considered for a Vertigo revamp, Vankin mentioned the coming "Deadman" by writer Bruce Jones. "There are other characters always being kicked around, but nothing on the schedule right now." he added.

"Were doing a vertigo revamp of "Deadman," written by Bruce Jones ang its going to be an interesting series. These other characters are always being kicked around, but nothing on the schedule right now."

Attention was then turned to the world of cinema as an 18 minute preview of "Constantine" was presented and warmly received by panel-goers, some of which were openly dubious about the adaptation.

"We were admittedly very nervous about making Vertigo characters into movies. [Director Francis Lawrence] was very enthusiastic about what they were doing and felt they were working on something very special. The studio is supporting it 110%," said DC VP Richard Bruning following the clip.

"I actually first received the script in May of 2002." said Lawrence who was on hand for the preview. "I went through a whole process of meeting with executives and slowly built up a large visual presentation and sold the producers....and Keanu on me."

"There was a battle with the studio," he explained. "The studio wanted lighter fare, but I think you'll see...we won."

Lastly, thanks to Jude for some relevant links for Constantine's score composer, Brian Tyler.

I should be getting Timeline from Netflix tomorrow and I'll be paying close attention to the score on that as well.

"There was a battle with the studio," he explained. "The studio wanted lighter fare, but I think you'll see...we won."

Let us hope Mr. Lawrnce isn't being too naive here about what can happen in the editing room. I hope this stays R. Somebody needs to remind these people that the Matrices are R rated.

Be interested to see what you think of 'Timeline' krix - there's a certain scene that is unintentionally straight out of 'Bill and Ted's Excellent Adventure'. Afraid I thought Timeline made Bill and Ted look like Oscar contenders!

Here I am - still wondering after all these years why someone as influential as KR
doesn't have bigger power when it comes to editing his movies.
I remember him complaining about cuts to SN that downgraded it to PG-13,
now this ongoing discussion about Constantine...

I'm sure the WB, KR, and studio execs, are not an easy sell. But it looks as though, in the end, it worked out in his favor. Sometimes a slower process with challenges and interruptions can be advantageous. Smart guy...looks like he managed to capitalize on these to make it a better film, and now we see studio execs supporting it 110%.

...still sounds like it will come out in Feb as planned and I can't wait to see it!

well. very interesting article... good reading...thanks! just as a positive spin/thought on the whole editing thing...i do remember signing that petition that went around about putting the cut sn scene into the dvd version of the property... but I don't think the petition was effective...however, it's just my opinion that the editing works together for the highest and best good - usually of the project......i doubt that my opinion really counts.

Posted by: wanda on August 19, 2004 03:19 PM
What's on your mind?.....
(new here? please read this before commenting)
Remember, this is a fan site.
Keanu Reeves is in no way connnected to this website.
Please do not make a comment thinking he will read it.
Comments are for discussion with other fans.
Thank you.