A little Constantine with your Sunday coffee

Thanks to forum poster Benny Fanboy for this transcript from the Constantine panel at Comic-Con. Some of it is replay, but Keanu's first few answers are new to me. 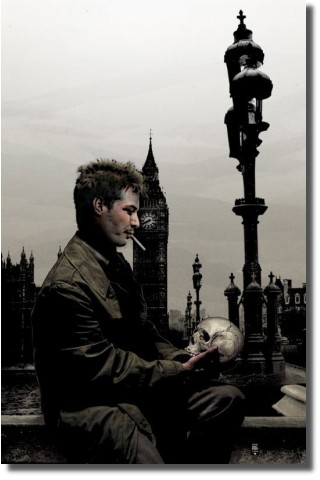 Question: How do you deal with your status as a celebrity and does it affect your roles?

Reeves: I don't think of my status as a celebrity. I'm just trying to make good films and act and have a career. In terms of the reluctant hero or anything like that, they're great roles to play and they¹re roles that oftentimes speak about ... I don't know ... trying to do good things in life, trying to be better, redemption. I'm not doing so well with that personally, but I got to work with Francis and hopefully we did a good picture.

Question: Can you talk about your process as an actor and preparing for the role?

Reeves: I had the great fortune of working with some really great collaborators. Francis allowed me to work with him and kind of form the script, and he's a really good jist of what Constantine is, that kind of hard-boiled guy. His humor. I got work with the writer Akiva Goldsman. That allowed me to really have input and try to get that Constantinian Constantine, you know. That hard-boiled, (in character), "It's the sulfur."

And the character itself is so beautiful. I mean it's a wonderful role for an actor. There's a lot to do. He's a guy who's been dealing with issues of heaven and hell and the kind of rule of the way life and the world works. And he's not quite happy with the way the world works. And I could relate.

Question: For Keanu, why didn't you bleach your hair for the role?

Reeves: Or have an English accent? Francis?

Lawrence: I think what was key to this character is the heart of the character, not the sort of the surface issues. We get asked a lot about why he's an American and why it's not set in London. And this movie is an adaptation and what we did is really stay true to who Constantine is. He's a magician, he's a con man, that he is world weary, he is haunted by his past, he is sarcastic, that he's self-serving, that he's manipulative, he's elusive. And that, for me, to this movie means a great deal.

Some of the choices were custom-fit for the actor and for what I felt fit best for the look and the feel of the film.

Question: How do you get ready for physical roles, like this and The Matrix?

Reeves: Train. I mean, I just really enjoy it. I like the physical aspects. But, yeah, just training.

Question: What was the best part about Constantine?

Reeves: Going to hell and back? This was one of the best experiences I've ever had in making a film. It was because of the role itself and the people I got to collaborate with. It was just a great experience: the crew that I worked with, the script that I got, the character that I played, the actors that I got to work with ... all-around, just a great experience. I really like the character. I like John Constantine. I like him.

Question: You deal with the Spear of Destiny. Do you dig into the Christian lore?

Lawrence: Very deeply, actually. The Spear is actually through-line that goes all the way through the film. So you learn about the legend of the spear, some of the tales, some new things, as well, things only Constantine would know.

Question: How do you feel about the green-screen work?

Reeves: The thing I liked about it is that you do have a sense, a kind of control in it. But at the same time, you miss the interplay, you miss the surprise, you miss the other kind of interaction. But it's also fun in the same way, too, because it's an element of make-believe. But if you too much of it, oh my God, it's a nightmare. But I love it. It's fun.

Lawrence: One of the key things for me in working with green screen is really making sure you can help the actor create the world that's around them, so they really know what's around them. If there's wind, you can have wind. If there's dust, you can have that. Any of the elements you can add really help create things, and point out very specifically what's going to be in the environment around them. And having long discussions about it and pre-visualizations so you can show the actor action sequences and they can know what's going to be happening that way as well.

Question: Is the film going to PG-13 or is that still being decided?

Lawrence: It's still being decided. We'll submit the film and see what the MPAA thinks. I sort of, in a weird way, feel like we've gotten away with something with this movie. I don't think we've held back at all. The movie's scary, the movie's intense and I think the tone is dead-on to the comic. So feel very good about it. For a big-budget movie, this isn't pop. We're dead-on.

Question: Karen, how do you feel about how far this film has come?

Berger: It's pretty incredible. I saw a rough-cut of the film a few days ago at Warner Bros. and I was really impressed with how close the film stuck to the spirit of the comic, how it really felt like Hellblazer and how it felt like a Vertigo book. Smart, edgy and it's weird. The cinematography was wonderful, and the special effects are great. And it really pulls from the great source material of the comic. It really pulls from the right stuff.

Question: Will you be working with Andy and Larry Wachowski again?

Reeves: I hope so. I really hope so. I love those guys to death. I just think they're wonderful people and such great artists.

Question: Dijmon, congratulations on In America.

Hounsou: Thanks ... selling Constantine here (laughs). Constantine hit home for me personally, the fact that I came from a world that knows about voodoo in Africa and so forth. This is the visual reality of that world, a Western point of view the occult world.

Question: Why the title change? Were there other changes?

Lawrence: The title was changed originally because nobody wanted the title to be connected to Hellraiser at all. It was a little too similar and nobody wanted any confusion.

I don't think there are differences that I can think of off the top of my head. Again, I think it's really close to the spirit of Constantine and the Hellblazer stories. He's a tad younger than the comic, and I think that's about it. We didn't pull an exact story from the comic book. We kind of pulled pieces from different stories and made our own, so it's not an exact replica of one of the graphic novels, although there are definite pieces.

So, now I'm holding a little hope in my heart for the rating thing. I trust WB will be by to choke it out of me shortly.

Also, SuperHeroHype has some Constantinian content this morning. (-via keanuweb)

Is there any way around WB?
How I'd love them to forego PG-13...
They should have learned the difference between
a Graphic Novel and a comic for kiddies by now!
:-|

"...trying to do good things in life, trying to be better, redemption. I'm not doing so well with that personally..."

@smit too
means nothing more as he is self-critical ;-)

You did a beautiful job on de-Roganizing that pic, krix! Just love it...

I'm keeping my fingers crossed on the PG-13 rating affair. But I don't trust WB either... :(

Actually, Rogan had nothing to do with this one, my friend ~L did it.

Great drawing and thanks for the article.

Well, we know they’ve decided to move forward with the promotion of this movie...I think that's pretty clear now.

yeah, Mikey, whoa... it's great to see keanu so excited about a character -- probably means it'll be an exciting movie experience.

Yeah...thanks for the pics Krix, they ARE beautiful!

Mikey made a funny.

I should calm down.

soooo can't wait for this one! moving forward, eh!! excellent! ;-)

nettie... made comments several times on keanuholic...they are not posting!!??? eekk!!

I can't wait for this movie to come out! bet they'll have a sneak-preview someplace..I just LOVE those!

Posted by: wanda on August 3, 2004 02:09 PM
What's on your mind?.....
(new here? please read this before commenting)
Remember, this is a fan site.
Keanu Reeves is in no way connnected to this website.
Please do not make a comment thinking he will read it.
Comments are for discussion with other fans.
Thank you.