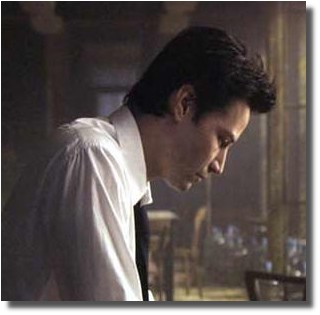 Keanu will be discussing Constantine at Comic Con 2004 in just a couple hours, hopeully there will be some news from both comic and Keanu fans sometime today.

For now, here's a new image and also a look at a sculptured figure (creeepy!) and a Holy Shotgun replica, both on display at the Con. 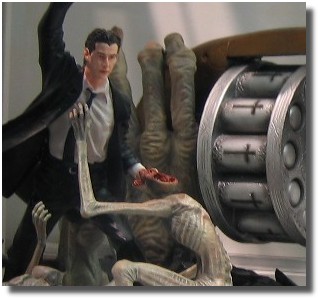 via straight to hell

You mean "action figure." Of course do matter what you call it, it translates into perfection!

I would love to get a peek at the discussion from this! thanks krix for the heads up!

Well, since Pen did it on the last entry...I photoshopped the elongated Constantine pic .. well, shoot, I don't know how to link to an image in here :(

can't wait to read a report on Comic-Con...and do ya think WB released this photo to make some subliminal point, since it's similar to one of the Neo pics they released before Revolutions? those crazy PR people!

mmm, JC is quite the babe... is it february yet?

The action figures didn't look creepy they look laughable.
Bur this is only my tast.
Hoe the movie is better than these figures.

Keanu looks unbelieveable thin on the picture above.

Creezy, that is because that picture is elongated. If you stretch the pic back to a normal orientation, he looks fine. Well, thin, but then he is thin at the moment.

sorry, I meant to say--he looked thin to me during the time when he was working on Constantine.

I know what you mean, Nudel: They stretched him while he was working on Constantine! *lol*

But thats what I wanted to say about him, he looked very thin while he worked on that movie.

If it wasn't for the fact that I hate the song Straight to Hell, I'd spend more time at that forum.

Anyhoo, this is going to rule.

Tabitha - please overcome your loathing of that song, we'd love to see you there more often...

Posted by: Rogan on July 24, 2004 05:11 PM
What's on your mind?.....
(new here? please read this before commenting)
Remember, this is a fan site.
Keanu Reeves is in no way connnected to this website.
Please do not make a comment thinking he will read it.
Comments are for discussion with other fans.
Thank you.