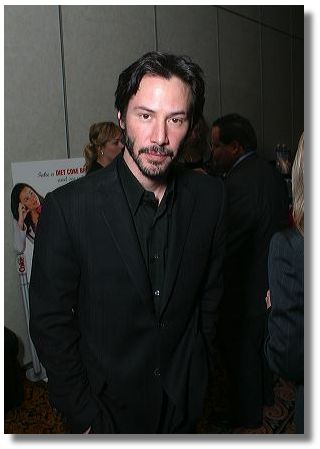 Thanks to Club-Keanu for pointing out that ShoWest's official site has a link to photos taken at the convention that are browsable and actually available to purchase as prints.

I'm just getting a chance to look through the 1000+ images and there are several groups of Keanu photos.

-During the award ceremony for Nancy Meyers

- and also graciously posing with other ShoWest attendees.

No, I'm having some problems with the blog.

krix, as always, you are so helpful. Thanks for going through that massive number of photos to find the Keanu photos! You're a doll.

Is it still socially acceptable to loathe Jack Black? Even if I have no real reason for the loathing other than a gut feeling that he deserves to be loathed?

If not, I'll have to loathe him even more.

I decided to forgive Jack Black after seeing Keanu smiling so broadly with him. Otherwise, I find him obnoxious and unfunny..but I haven't seen School of Rock yet, so he may win me over. He's forgiven, but I don't have to *like* him.

hmmmmmmmmmmmmmm....... yes i'll have something to do with my spare time now, DEFINETELY
lol
;-)

Posted by: Cornflakes on April 20, 2004 09:46 PM
What's on your mind?.....
(new here? please read this before commenting)
Remember, this is a fan site.
Keanu Reeves is in no way connnected to this website.
Please do not make a comment thinking he will read it.
Comments are for discussion with other fans.
Thank you.