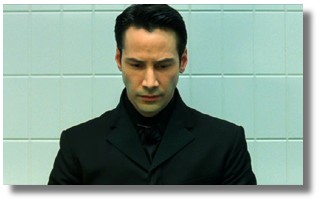 "The first film shook the foundations of Hollywood and instantly became one of the most enduring film images of the modern era. Not only a special effects film, The Matrix blended an incredibly intricate storyline with mind-blowing special effects, something which audiences took to immediately. A sequel wasn t immediately on the cards, but with the film's success it was probably inevitable. The Matrix Reloaded was born.

The second film tried to take the action and, more importantly, the story to a new level. Special effects were again the focus with some of the most visually appealing showcases sequences since, well, the first film. The narrative was really beefed up the second time around, much to the detriment of keeping the audience in touch with what was going on. I swear I could see a giant question mark over the whole cinema on first viewing, and a smaller version when I reviewed the new release DVD. But, like all great trilogies, the third installment is always the one to behold. Bring on The Matrix Revolutions."

Go to DVDanswers.com for Pete Roberts on the film, the transfer and the extras of The Matrix Revolutions DVD, due for release early next month.

This is actually for the Region 4 DVD, I hope that R1 has the same features at least. The extras sound pretty good.

It sounds like the same as what I've heard is going to be on Region 1. Yeah, they'll be milking me dry on this stuff too. I'll buy it all and more...

well, since the asshole who broke into my place stole my matrix dvd, i'm planning to buy it all again, too. i still have reloaded, but hey, once i get the complete set, i can always sell it at amazon or ebay. mmmm, i smell a matrixmarathon coming up in april!

As the DVD will be delivered here on April 1, I have already set a date with family and friends for the Matrix Marathon. I am really looking forward to this - and to all the extras this set will contain!

Posted by: Niobe on March 17, 2004 10:45 PM
What's on your mind?.....
(new here? please read this before commenting)
Remember, this is a fan site.
Keanu Reeves is in no way connnected to this website.
Please do not make a comment thinking he will read it.
Comments are for discussion with other fans.
Thank you.