luckily, I woke up

The shovel lady scares me.

The band sounded good in spite of the iffy TV mix.

I think my fever is returning.

Or could just be that the bass player is teh HOTNESS. 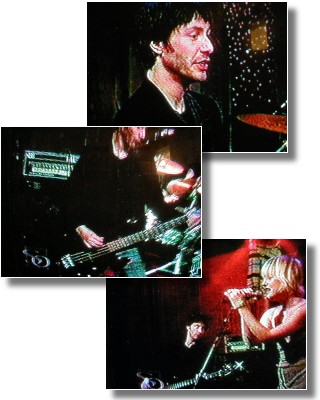 Oh Lordy, He is an absolute BASS GOD..

And the way he smiled to the Ozzie Reference just makes me all warm and fuzzy....
Thanks for the pics.
Hoping you're feeling better soon, Chick.
Take care...

I liked that too.
And I really liked his hair, and his fast hands.

Yep, He looked *delish*. Sharon O. Has A thing for our guy. Asking him to audition for the Part of Ozzy on her Casting Couch.*LOL* Shame on You Mrs. O. or maybe not. (~_^)

It was a great performance--I thought the magician was really good:D (and kinda cute too...but not as good lookin as that bass player ;) ) It was a really nice performance on all acounts:)
I have to disagree with you krix about his hair though..--i mean no offense cause he still looks great in nearly everything--but i just thought his hair was a little too flat and short .."dorky" (though i have nothing against "dorks" as i'm probably one myself or if not that definitely a nerd because of my english affinity--apparently a geek has a math/science affinity...)
but anyway--i thought the hair was a lil too flat and wasn't really flattering though it was successful in playing him down a bit (i liked his hair from the decadenet pics later last year or the "neo" or "constantine" cut better..)
[...]

Luckily you saw it...friggin'TV in IA!!

We haven't had pictures off the TV in like forever krix. Thanks!
I think the hair looks scrumptious.
I can't believe I forgot to tape this. *stomps foot* nudel? sweeeeeetie?

If I can't have the S-O-S in this far-away land, I can at least be much obliged to you for supplying the pix, Krix!
I think I like his hair. Hope your health is improving btw @-->--

Can some kindly person please send me a copy of the show...?

it was great to see keanu and the guys sounded great...i'm still not sold on Rebecca's voice. glad others got to see them play to judge for themselves.

did keanu look a little upset at Sharon's request for him to play Ozzie?

Ooh...like the round better than the pointy.

becareful, i m the sherif!

Posted by: christelle on March 12, 2004 12:27 AM
What's on your mind?.....
(new here? please read this before commenting)
Remember, this is a fan site.
Keanu Reeves is in no way connnected to this website.
Please do not make a comment thinking he will read it.
Comments are for discussion with other fans.
Thank you.