I wanna be "that girl" 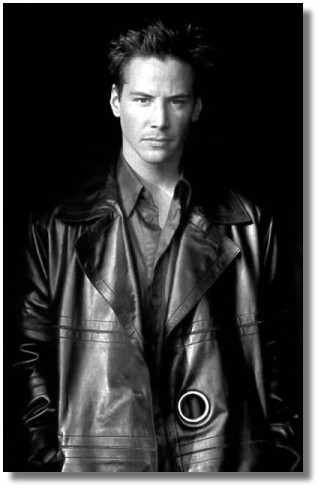 Thanks POTD for the link to this interview with Keanu. Excerpts below, read the whole thing at InSiteAtlanta.com.

A film junket press conference is a surreal event. Reporters from all around the world crowd into oddly shaped rooms and jostle with each other for a seat close to the “talent,” many of them ultimately asking asinine questions that mean nothing. Such as when a reporter blurts out from the back, “Your character, Julian, is a confident character. Where do you get your confidence in real life?”

Keanu leans forward and says with mock seriousness, “From within. You know, there’s a book I once read... No, I was playing a character. I thought he was well-rounded and grounded, and [portraying that was] the obligation of the role.”

The actor’s remarkably youthful appearance belies his age. How does he stay so young? “I have a picture in the attic,” he says, smiling. How does he plan to spend his fortieth birthday next year? “For my birthday, I’ll either be really alone, in the middle of the desert, or I’m going to have an outrageous party.”

Yet another inane question gets asked– are you romanic in real life? “On good days,” he says good-naturedly, but doesn’t elaborate. And what, one reporter wants to know, is the craziest thing he’s ever done for love? “My friends would probably say, ‘Falling for that girl,’” he answers in typically enigmatic fashion.

A longtime bassist in the band Dogstar, Keanu was inspired by and brought up on punk music. Strangely, it’s when talking about music that the actor is at his most animated. “I was a lucky kid who heard The Ramones, Violent Femmes, the Clash, Exploited, Joy Division... My worlds got a lot better. I found something I could express myself with– music I vibrated to.”

good article.
I wonder how " I have a picture in my attic" translates into a non-Reeves language...remember he said that when talking about him being so age-less?

I think he was referring to "The Picture of Dorian Gray" where the picture in the attic ages but the owner does not.

Oh, yeah, he can vibrate for me anytime...

I believe he is referring to "The Portrait of Dorian Gray."

Thank you ladies for the explanation...I guess my only excuse for not knowing the Dorian Gray thing is that I am non-american... ok, now I have to run and read/watch the Dorian Gray stuff...thankxxx... just can't let Mr.Reeves trick me like that... he-he-he.

Yeah, sorry wrong title. Too much cold meds. Should have previewed my post.

He shouldn't make comments like that! LOL Doesn't he know the effect that will have on us? That will surely cause some sweet dreams tonight! :-)!

Either way I guess that sort of answers the gay thing, not that any of us really thought he was.

Not that there's anything wrong with that(anyone see that Seinfeld episode???).

And I wonder what he was doing in Switzerland? hmmm ...

his veiled reference to Dorian Gray truly made my day. that's our keanu, showing that he's well read without actually crowing about it. god, i love this man!

HE HAS A PICTURE IN THE ATTIC!

Bwahaha! I KNEW it! I've been saying that for YEARS! Except I figured it was stuck in the back of Kim's closet.

And by the way Lusenka, "Dorian Gray" was written by Oscar Wilde, way back when. Not an American, and lived way back in the 1800s. :)

Posted by: Sparrowhawk on January 9, 2004 10:35 PM
What's on your mind?.....
(new here? please read this before commenting)
Remember, this is a fan site.
Keanu Reeves is in no way connnected to this website.
Please do not make a comment thinking he will read it.
Comments are for discussion with other fans.
Thank you.