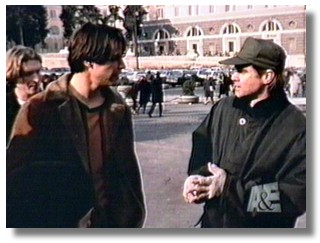 Well hell. Was the only repeat of A&E's Biography show on Keanu at one in the morning last night? I've heard it wasn't bad and was going to get Roi to tape it for me. Ah well, not to fret. A very lovely person is making me a tape of all the cable stuff I missed so I'll see it eventually.

I'm so behind, I just watched the E! thing that Roi taped for me yesterday. I hear it wasn't as bad as most of the "True Hollywood Story" shows usually are, but it was still pretty bad. Tabloidy. Feh.

It was a treat at the end to see the infamous "E! for Egregious!" footage.

You said it, babe.

I still have to catch up and watch the E! Behind the scenes for the Matrix. Taped it 2 weeks ago and haven't had a chance to watch it yet. I saw the Biography show last night. It wasn't too bad. I think Keanu must have authorized it since both his manager and Rob gave interviews for it. I can't imagine they would give interviews about Keanu without his permission.

Well, like I said, for maximum enjoyment you Keanu-philes could just watch it with the volume turned down. :)

I watched the A&E thing. It wasn't bad, although Mikey2 is right. It would have been good with the sound off. Really nice pictures. Wasn't Rob just the handsomest?

By the way, what is the infamous "E! for Egregious!" footage ? I don't think we get E! where I live. I've never watched it.

a non-keanufan friend of mine called me yesterday afternoon to let me know about the Biography show on keanu last night. i hadn't intended to watch it, but since she went to the trouble, i did. it was pretty good, though my skin crawled when they talked about the whole J.S. thing... good to see Rob and Alex talking about their friend. And yes, very nice to see keanu preserve his silence....

E! was also for "erroneous." He is such a clever, witty renegade. I think they were too obtuse to pick up on his slam.

I found the Biography from A&E to be better than the E! True Hollywood story in it's portayal , fairness and selection of clips..E! used the same clips over and over and used them in odd places adn it was annoying...One example that pissed me off a bit: On the Biography they said Keanu did many stunts for Speed (and rightfully so) while E! seemed to take the route that by misusing Keanu's modest quote of "If I'm up there it's not a stunt" and adding it to an interview of Keanu's stunt double ffor Speed saying how he (the double) was the one that went under the bus not Keanu and making it seem like he didn't want to/unwilling to do any "stunts"... I liked the one from biography, it was rather decent...
Though I did like this one section of an interview E! had from Keanu that was about how his grandma would hit him with his hotwheels tracks and one day he heard her coming up the steps and decided to try frantically to hide all of the tracks only to cause her to use his *goalie stick* instead. ouch. :) [overall E! had "cute" clips but was unfair, while A&E had the overall better presentation]

(she would hit him with the tracks when he did something bad..duh...not for no reason...that would be pure evil-ness..though hitting a little kid with anything hard and plastic is eeevil-- even worse when it's a wood goalie stick...

Posted by: stacey717 on November 18, 2003 01:48 PM
What's on your mind?.....
(new here? please read this before commenting)
Remember, this is a fan site.
Keanu Reeves is in no way connnected to this website.
Please do not make a comment thinking he will read it.
Comments are for discussion with other fans.
Thank you.