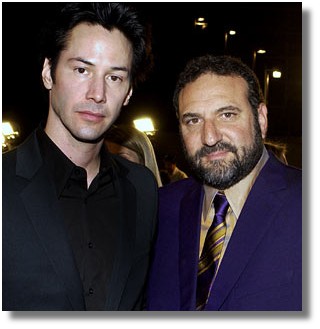 LOS ANGELES — Which way do you spin "The Matrix Revolutions"? The third movie in the cyberpunk trilogy earned $24.3 million at the domestic box office in its first day of release, Warner Bros. said Thursday.

That's a great one-day total for any other movie, but it comes in far below what "The Matrix Reloaded" collected in its nationwide debut last spring.

In May, "Reloaded" opened with a few late-night screenings on Wednesday evening and earned about $5 million. Then it expanded to 3,600 theaters on Thursday and earned about $37.5 million, according to Brandon Gray, proprietor of BoxOfficeMojo.com.

At the time, Warner Bros. lumped the Wednesday totals in with the Thursday figures and announced a total debut of $42.5 million for "Reloaded."

Gray said there may have been less anticipation for "Revolutions" simply because of the rapid-fire release timing.

"With the last one ('Reloaded') there was four years of pent-up demand and 'Revolutions' comes out after only six months," he said. "It's not quite the same event as the one that came out after a long drought."

Dan Fellman, Warner Bros. head of U.S. distribution, dismissed the notion that some viewers may be less enthusiastic about the franchise after "Reloaded," which scored poorly with critics and many fans.

"These are staggering numbers," Fellman said. "If you talk to any large theater operator they're totally out of their minds with joy."

"Revolutions" also collected $18.8 million internationally after staging the widest simultaneous release for a single film by opening in an unprecedented 18,000 screens around the world at the same hour (9 a.m. ET), according to Variety. Part of the studio's worldwide effort was to combat piracy.

"Revolutions" also ranked as the third best Wednesday debut for a movie, behind $28.5 million for 1999's "Star Wars: Episode I — The Phantom Menace" and $26.1 million for last year's "The Lord of the Rings: The Two Towers."

Although hampered by critics who lambasted "Revolutions" as a glorified videogame, the Keanu Reeves sci-fi adventure could still come close to topping $100 million domestically by the end of the weekend.

Paul Dergarabedian, president of box office tracker Exhibitor Relations Co., said he would wait until the weekend to judge how "Revolutions" compares to "Reloaded."

"Reloaded" earned a total of $281.6 million and became the year's third highest-grossing movie of the year, behind "Finding Nemo" and "Pirates of the Caribbean: The Curse of the Black Pearl," respectively.

I am not up on my Keanu movies as a should be, but is Revolutions the first movie were Keanu dies (well, except for Devil's Advocate, kind of)?

Over and out,
Weezie

I don't think so. I think after the sword fight he goes to see Michelle Pfiefer's character.

I think it must be such a hard thing to do -- to play someone who dies -- and he did it beautifully. It really says a lot about how great an actor he is.

His character died in The Watcher. I think he fell into the river.

Very disturbing movie that one. Imagine getting all hot and bothered over bland dry as toast James Spader. Yuck!

But worst of all was the disfigurement of that handsome, glorious face. Nope, nope, not worth a second look. Well the last scene anyway.

Yes, and there's a Reuters article over at CK that says the global numbers are at $43M.
Not too shabby.

I think Joel is punishing himself for slighting you by wearing a purple suit. IMO of course...
I'm kind of sad about not having Joel to schmooze/scold anymore too. We're gonna miss ya, buddy!

lookit, krix's two boyfriends together in one pic! and for shame, krix, you know Danceny *kills* Malcovich's character, he prevails! nobody died but Griffin, and he got just what he deserved... also, imho, James Spader is anything BUT dry -- he's right as rain. i love his quirkiness, like a modern day Anthony Perkins. did anybody see Secretary? yowzah!!

ooh, wait, Ted died, too, and stayed dead for a good portion of the movie (BJ). i'll shut up now.

i was just thinking..maybe i need to watch REVOLUTIONS again..as ive heard it does wonders to see it at least twice hehe..but..in the movie..did it actually SAY that NEO died ?? i mean we see him laying on the machine thingie..drifting off ( machine taking him somewhere ) and i do remember Keanu himself sayin ' my work is done ' BUT that doesnt necessarily mean..NEO DIED..he couldve been in a coma..fainted once again from the devouring of his inner strength...ya see what i mean ?

and i gotta say real fast..that i too ADORE James Spader and his talent..hes a very 'down to earth..boy next door' kinda person..least to me

Good to see he makes THAT face with whomever he's taking a photo with- not just fans. TECHNICALLY, Neo died in the first Matrix!
Katie

I like James Spader and lori, I saw Secretary too. Yowzah is right!

Posted by: Keanuette on November 9, 2003 10:53 AM
What's on your mind?.....
(new here? please read this before commenting)
Remember, this is a fan site.
Keanu Reeves is in no way connnected to this website.
Please do not make a comment thinking he will read it.
Comments are for discussion with other fans.
Thank you.