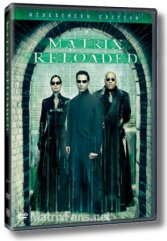 LOS ANGELES (Hollywood Reporter) - In an industry first, Warner Home Video is releasing "The Matrix Reloaded" on home video three weeks before the theatrical release of the third film in the "Matrix" trilogy, "The Matrix Revolutions."

"Reloaded," starring Keanu Reeves, Laurence Fishburne and Carrie-Anne Moss, is slated for release Oct. 14 on DVD and VHS at a retail price of about $22, Warners executives said.

Such franchise films are typically widely separated from each theatrical release under the theory that a home video release of the same series will deplete ticket sales at the box office. But Warner executives believe that this new strategy will work to pump up what has been a lagging industrywide box office take.

Under the slogan "Reload Before the Revolution," Warners is combining the consumer awareness surrounding the Nov. 5 theatrical release of "Revolutions" with the home video release of "Reloaded" as a way of consolidating their marketing dollars as much as hoping to discover a new marketing mechanism.

"I don't believe it will affect ticket sales in any negative way," said Ron Sanders, Warner Home Video's domestic executive vp and general manager. "In fact, I believe that the home video release of 'Reloaded' will boost ticket sales of 'Revolutions.' "

"Sure, this is an industry first," he added. "But we believe that this franchise presents us with a unique opportunity to combine a theatrical release of a very popular film with home video that will set a precedent for sales within the industry."

While both the VHS and DVD will be priced for sale to consumers, the DVD includes several bonus features that should boost sales, such as a behind-the-scenes look at how the freeway chase scene was crafted and shot and the humorous parody of "The Matrix Reloaded" that was featured on the 2003 MTV Movie Awards.

"The Matrix Reloaded" has grossed about $274 million at the North American box office after nine weeks.

UPDATE:
Also this press release from Business Wire that lists the features...

BURBANK, Calif.--(BUSINESS WIRE)--July 14, 2003-- Prepare to be blown away on October 14 with the highly anticipated DVD and VHS release of the record-breaking $700 million worldwide box-office smash hit The Matrix Reloaded.
Written and directed by the Wachowski Brothers and produced by Joel Silver, The Matrix Reloaded is the second chapter in the Wachowskis' groundbreaking action film trilogy that explores the nature of reality and the search for truth. In addition to the return of original Matrix stars Keanu Reeves, Laurence Fishburne, Carrie-Anne Moss and Hugo Weaving, The Matrix Reloaded features such new cast members as Jada Pinkett Smith and Monica Bellucci.

Premiering October 14 on DVD and VHS from Warner Home Video Inc. (WHV) and Village Roadshow Pictures, The Matrix Reloaded is timed for release three weeks prior to the theatrical opening of The Matrix Revolutions, the final film in the futuristic series. The Matrix Reloaded will be priced to own at $29.95 SRP for DVD and $22.99 SRP for VHS.

Preload -- Get a behind the scenes overview of The Matrix Reloaded with on-location footage and interviews with cast and crew.
The Freeway Chase -- Behind the scenes footage shows the viewer how the mind-blowing scene was captured on film.
What is The Animatrix? -- A glimpse into the history and the intrigue of the Animatrix.
Enter The Matrix -- Making of the best-seller video game and the groundbreaking technology used to create it. Your exclusive opportunity to step inside the world of Enter the Matrix.
The Matrix Unfolds -- A review of The Matrix phenomenon and its amazing cultural impact.
2003 MTV Movie Awards Matrix Reloaded parody.
Get Me An Exit -- Matrix-inspired advertising.
Weblinks to the official Matrix website.
SYNOPSIS

In the powerful second chapter of the Matrix trilogy, Neo (Keanu Reeves), Trinity (Moss) and Morpheus (Fishburne) lead the revolt against the Machine Army as it attacks Zion, the last human city on earth, unleashing their arsenal of extraordinary skills and weaponry against the systematic forces of repression and exploitation. In their quest to save the human race from extinction, they gain greater insight into the construct of The Matrix and Neo's pivotal role in the fate of mankind.

What is The Matrix? The question is not yet fully answered. And it leads to another: Who created The Matrix? The answers lead to more worlds of bold possibility -- and to a destiny that passes from revelations to Revolutions.

I don't fancy the cover much.

I reckon they should've just had Neo's face like the greenish posters - Johnny Mnemonic stylee...

luv the marketing strategy -- for business and
most definitely {{{{{{sigh}}}}}} personal reasons.
Okay, I admit I like this gem of a movie for allLLL its textures and energies...
YAY!@


Posted by: phoenix IX on July 15, 2003 07:45 PM
What's on your mind?.....
(new here? please read this before commenting)
Remember, this is a fan site.
Keanu Reeves is in no way connnected to this website.
Please do not make a comment thinking he will read it.
Comments are for discussion with other fans.
Thank you.