Thank you to M.C> for sending this article from the Globe and Mail in Canada. 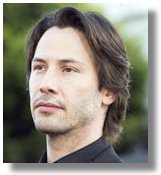 From dude to deity

By BOB STRAUSS
From Tuesday's Globe and Mail

Five years ago, those words strung together would have elicited derisive laughter. Before then, the closest the Toronto-bred actor came to representing a state of bliss was the ignorant kind associated with his perfectly embodied teenage doofuses from the Bill & Ted and Parenthood movies. Even the budding Buddha role he played for Bernardo Bertolucci had a certain Dude! quality; or, at least, could not avoid audiences projecting one onto it.

But all of that has been changed by The Matrix, in which Reeves started off as a computer hacker who said "whoa" a lot but, by the end, had metamorphosed into the comic-book Christ figure Neo. With most people enslaved by a race of sentient machines, but wired to think they were living free in the high-tech title illusion, Neo and a small band of human rebels represent mankind's only hope of salvation.

Not too much unlike the way The Matrix itself brought new hope to moribund action, sci-fi and special-effects movie genres in 1999. The brainchild of writer-director brothers Larry and Andy Wachowski, the film mixed myth and philosophy, gravity-defying martial arts, digitized dances with bullets and a brain-taxing inquiry into the nature of reality.

Unexpectedly a big hit but a bigger pop-culture watershed, The Matrix had many elements. But as the hotly anticipated Thursday release of its first sequel, The Matrix Reloaded, looms (the final chapter, The Matrix Revolutions, shot concurrently with Reloaded, comes out in November), Reeves remains the franchise's most iconic element.

"I don't really get that Neo-as-icon thing," says Reeves, 38, lean and more impassively handsome than ever, wearing a blue sports jacket over a red T-shirt. "If anyone comes to me, it's always about The Matrix, it's always about the film. All of us characters are really just part of this world of The Matrix that Larry and Andrew Wachowski have brought to us with their vision and have hoped to create in this collaborative artform. But it's really, The Matrix is it; we're just part of it."

Here's where the real-life advanced being manifests. Any other movie star, especially one whose thespian worthiness has been questioned in the past, would surely display some signs of ego after success of this magnitude (the actor will reportedly pocket $30-million [U.S.] or more, depending on box-office grosses, for the two sequels).

But key as he is to the whole Matrix equation, Reeves remains humble and surprisingly unaffected. He still speaks in either the same goofy, impulsive cadences he did when he was playing teenagers — in such acclaimed pieces as River's Edge and Permanent Record, along with the Bill & Ted burlesques — or the intellectualized, awkwardly formal constructions that reflect the Dangerous Liaisons and My Own Private Idaho section of his résumé.

He has to be goaded to even address the Herculean physical effort required for the sequels' 270-day shoot — and the six months of training that preceded it. Informed that co-star Carrie-Anne Moss, who plays Neo's warrior lover Trinity, says she often heard him screaming in pain while preparing for some insanely complicated martial-arts acrobatics, Reeves seems almost embarrassed that it would be considered anything more than part of the job.

"I mean, I'm not doing real kung fu, but I'm doing real stretching, and it's no joke," he'll admit. "It's 20-pound sandbags on your legs, it's people pushing down on you and it's what we call popping. You know that pop sound? It's necessary. Well I mean, if you want to heighten your kicks and stuff like that and have clean lines and lower stances and stuff."

Not one to dwell on suffering, Reeves becomes much more articulate when addressing the artistic intelligence that informed the labour.

"In The Matrix, Neo is an ass-kicking kind of guy," he bluntly but accurately notes. "As an actor, it's a matter of finding that part of oneself and meeting it with the character, then trying to play the role. So it's pretend, but it's also coming from a source inside myself.

"He's a fun guy to play. In the fake fights, in the kung-fu stuff, I got to do some cool things. I wanted to have a certain style of fighting in The Matrix. I wanted it to feel physical and visceral, but at the same time have a kind of style to it where — because it's something that's not really, physically, happening — it had an otherness feeling to it. But there still had to be physical effort on his face, and impact. And I also wanted it to have a certain elegance to it, so that there was, sometimes, effort, but also an aspect of effortlessness to it. That was the kind of style I tried to create in my acting out of the choreography that was developed by the directors and Yuen Wo Ping, the fight choreographer."

Sounds tortured, in several senses of the term. But the results are sublime.

"Keanu expects a lot of himself," Moss observes. "It comes from a very genuine desire to be good and to fulfill his obligations. At times, I would feel like maybe he was pushing it too much. But you know what? In order to do what he did, he had to push himself that hard. He's the most committed person I've ever met."

There are other passions and distractions. He still loves motorcycles despite some hairy accidents. And he's still committed to the band Dogstar, for which he plays bass.

"The status of Dogstar is, we did some shows when I first got back from Australia," Reeves explains. "We had a great time; we went to Japan, and played a show in Bangkok, which was great. Right now, we're taking a little break. We tried to write, but we'd been away from each other for so long . . . We've kind of got to have a band meeting and decide what we want to do here. But it's important to me because I love the friends that I make the music with and it's fun to create."

Also important: getting back on the legitimate stage. Reeves has, after all, played Hamlet as well as Neo and Ted.

"I want to do a play," he says, almost giddy with anticipation. "I need to go do a play. I'm trying to find a new play, and hopefully next year . . . I've gotta get back on stage for a little bit. 'Cause I love it. It's not short segments of acting, it's the whole experience. The continuity aspect of it, the live aspect of it; for me, it's home."

Not that Reeves is doing too badly in the short-take film-acting department. Although his projects between Matrix productions have been modest or forgettable or both (The Gift, The Replacements, Sweet November), Reeves is currently filming a romantic comedy with no less than Jack Nicholson and Diane Keaton.

"It's just amazing to see such great artists at their craft," he says with enthusiasm. "And Laurence Fishburne and Hugo Weaving in The Matrix? Those are just some of the best actors I've ever worked with. So the chance to act with artists like this, all of that does give me a sense that I've been through some things and really done some acting."

Rarely treated kindly by critics for even some of his biggest hits like Speed, Bram Stoker's Dracula and The Devil's Advocate, Reeves seems at peace with the notion that there'll always be room for artistic growth.

"On good days . . . well, you learn about acting by acting," he says. "I know, certainly, more about my craft and what works for me now. I know what tools and what things I need to do for myself to perform a role.

"One of the great things about working as an actor is to find things out about yourself and express them . . . and, y'know, not have to go out and wife-beat or anything," Reeves says of his own path to personal realization. "But to have the opportunity to look into it, to feel that, to experience oneself, to have things revealed or to find out things that you have problems revealing or things that you didn't know . . . it's just all of that. So if you've got some acting classes, you want to do some theatre, you want to go out there and play, I'd recommend it for anybody. 'Cause it's good."

It is nice to read of him refering to Fishburne as an artist. I think he is terribly underated. He did a very good Othello which is a role lots of actors fuck up but good.

I've never seen Hugo Weaving in anything else but the Matrix so its a bit hard to judge his range. His speach about the stench of humans made me laugh hard though.

Sublime article that I'll have to add to my collection.
thanx MC and krix!@

the only thing that bothered me about this article was that the author described Thomas Anderson as a hacker who says "whoa" a lot... WRONG! Neo says "whoa" once in the film, and that's as Neo, not as TA. ok, i'll shut up now.

Posted by: Lori on May 13, 2003 08:14 PM
What's on your mind?.....
(new here? please read this before commenting)
Remember, this is a fan site.
Keanu Reeves is in no way connnected to this website.
Please do not make a comment thinking he will read it.
Comments are for discussion with other fans.
Thank you.