I'm smiling too hard to think of a proper title 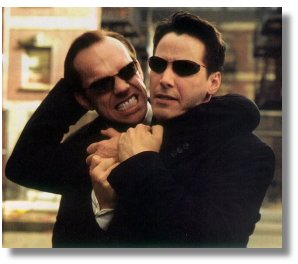 From the Toronto Star:

HOLLYWOOD — Nothing says "thank you" like a truckload of shiny new motorcycles, delivered to the people you've been kicking in the head.

That's if you're Keanu Reeves, the reclusive actor turned master of the grand show-biz gesture.

When work finally wrapped on the Burly Brawl, the key fight scene of the hotly anticipated sci-fi sequel The Matrix Reloaded, Reeves had a dozen Harleys delivered to the set as a gift for his stunt men.

It's the kind of thing Arnold Schwarzenegger or Bruce Willis might do, not the spotlight-shunning Reeves, who usually goes out of his way not to act like a movie star.

"That made me smile, man, for months," Reeves says, relishing the memory.

The gift likely cost close to $200,000 (U.S.). But he could afford it — the former Torontonian is a millionaire many times over — and it was worth every penny to him to get everything just right in the Burly Brawl.

A jaw-dropping combination of martial arts mastery and special effects wizardry, the Brawl sets Reeves' cyberpunk hero Neo against more than 100 clones of Agent Smith, the diabolical avatar of the enslaving computers first enjoined in The Matrix, the surprise movie phenomenon of 1999. When Reloaded opens May 15, it is sure to be the scene most fans talk about, at least until Nov. 7, when the opening arrives for The Matrix Revolutions, the final part of a planned trilogy by the sci-fi visionaries Larry and Andrew Wachowski (a.k.a. The Brothers).

"I worked with 12 stunt men for about three weeks, intensely going through the fight," Reeves says, speaking inside a vast movie soundstage that has been decorated with large mechanical props from Reloaded.

"And then we filmed for basically almost a month, every day.... There was this one sequence where Neo gets grabbed by two agents and I do a back flip and kick two guys in the head. Flip back, and then the two guys get thrown back. Well, those guys got pulled into the floor 21 times. And every time I said, `I'd like to do it again' ... and it was like, `Yeah, man, let's go.'

"So we were all in this thing and we were all training together beforehand. So I just wanted to somehow, besides just saying thank you, say a bigger thank you, to all these guys who helped me make this, I think, one of the great movie fights in the history of cinema."

Reeves got so involved in the sweat and strain of doing the Burly Brawl, his co-star Laurence Fishburne was afraid to watch.

"I don't like being around Keanu when he's being hard on himself," says Fishburne, who plays Neo's mentor Morpheus in The Matrix trilogy.

"And he was hard on himself the whole time during the Burly Brawl. I used to be really hard on myself. But never as hard as Keanu is."

"It's just because it was important," he says, shrugging. "It was my job to do whatever The Brothers asked me to do."

Does that mean he's not as self-punishing as people say?

"I can be," Reeves says. "But I don't think I need any therapy or anything. I'm not so out of my mind.

"But it's an aspect of the piece that, as well as (the fighting), we work so hard to get the emotional aspects right. Those are the scenes, in those sequences, where there's something about symmetry, about having those things that you believe in. If I do something and I don't hit it right, or if it doesn't look right, you instantly feel it, you see it: You go `aaah.'

"So you don't want that. You want it to just be perfect."

Getting The Matrix Reloaded perfect, and not just good enough, was a much tougher job for all the cast members than making the original film.

The Matrix came out of nowhere in 1999 to instantly establish itself as a classic of science fiction, combining way-cool style with a head-rattling mix of Western and Eastern philosophy.

It challenged conventions about what is real and what isn't, what is fate and what is choice.

The Matrix, which earned $460 million (U.S.) worldwide, also introduced a new form of physics-defying slow-motion fighting that came to be known as "bullet time," and which has been endlessly copied in films as diverse as Charlie's Angels and Shrek, much to the chagrin of The Brothers Wachowski.

The aim with Reloaded and Revolutions was to up the ante to stay ahead of the competition, with both the intellectual and physical aspects of the movie. If the dense philosophy of Reloaded doesn't wow you, the action scenes certainly will.

Reeves doesn't normally do sequels — he turned away a king's ransom for Speed 2 because he didn't like the script — but it took no persuasion at all to get him to don Neo's dark shades and natty black overcoat for 18 months of concurrent filming of Reloaded and Revolutions in Sydney, Australia.

"The scripts were great. And I had such great experience with and faith in Andrew and Larry Wachowski. I just said yes."

Reeves was so eager, in fact, he even gave away part of his percentage in the film, a profit-sharing deal that could potentially sweeten his $15 million per-film salary by many millions more. No wonder he can afford to buy Harleys by the dozen.

"What I did was I put part of what was given in my contract to create a pool so that other people who don't usually do profit participation could see some money," Reeves says, clearly not pleased to be talking about money.

Reeves may be acting more like a movie star these days, but in many other ways he still seems like just plain Keanu from Toronto, a guy who loves playing and watching hockey, riding his own Harley and playing with his rock band Dogstar, which is currently in hiatus.

He'll turn 39 this year — he's pushing 40! — but he doesn't look a day over 25. He worked out hard to prepare for The Matrix and its sequels, but he looks lean, not muscle-bound.

In his 20-year acting career, he's seen both ups (The Matrix, Speed) and downs (Sweet November, Even Cowgirls Get The Blues), and he's wise enough to know that fame is ephemeral.

His attire for a day of press at Warner Bros.' Burbank studios in the Hollywood Hills is a thrown-together mix of a faded burgundy T-shirt with faded blue jeans, topped with an ill-fitting black sports jacket that looks as if someone loaned it to him for the day.

He's an unlikely combination of laid-back slacker and hyper-intense workaholic, which makes him perfect for the role of Neo, a computer hacker who is summoned to accept his fate as The One, the saviour of a mankind threatened by marauding machines.

"Keanu is unlike any actor I've ever met — any person I've ever met," says Vancouver-born Carrie-Anne Moss, who plays Trinity, Neo's lover and fellow warrior. The sexual heat between the two is much hotter in Reloaded than it was in The Matrix.

"Physically, he just takes himself to the edge," Moss says. "He's there because he loves the character and he loves The Brothers."

But Reeves, who has long been seen as one of Hollywood's most inscrutable stars, remains a difficult guy to really know, even for the people who work closely with him.

"I've known the man for five years and I love him," Fishburne says.

"But I don't know a thing about him."

Reeves is not about to change that, his flashy motorcycle gifts notwithstanding. He really does identify with Neo, who constantly queries what is real and what isn't, what is fate and what is choice.

"I really find that Neo is a beautiful man," Reeves says.

"His ethics and his morals and his search for his authentic life being, wanting to see how he deals with people and deals with himself, I really admire.

"And it's hard. I can't. I try, but I think that aspect is something that the film is also asking."-Peter Howell

~Thank you to Margarete

that was a great article. thank you for posting it.

What an inspiring person! Thanks for sharing. ...Makes me like him even more

Awww... That IS enough to make one smile on a monday-morning! :-)

What a nice article! Keanu is such a generous person. That certainly improves my outlook for this otherwise blah Monday morning.

Posted by: Lisa on May 5, 2003 06:58 AM
What's on your mind?.....
(new here? please read this before commenting)
Remember, this is a fan site.
Keanu Reeves is in no way connnected to this website.
Please do not make a comment thinking he will read it.
Comments are for discussion with other fans.
Thank you.