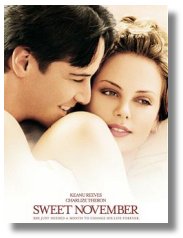 Keanu Reeves is hot. So hot he's a recurring character in my attempts at writing fiction. So hot he makes cameos in my dreams. So hot that when this vision of nothingness materializes on-screen, I lose my head and blissfully swallow any Keanu-coated illusion he's trying to sell - even the hardened businessman routine in Sweet November. (The film also reveals that Keanu is in dire need of some sun and looks much better as a surfer. But I digress.)

Some may mistake Keanu's vacant prettiness for lack of abilities in the acting department. Fools! Keanu's very allure is his absence of gritty, memorable, or defining qualities; those chiseled-jaw calling cards of traditional leading men. While most actors in Hollywood romances personify one of several multi-faceted stereotypes - tormented musician, sexy criminal, father figure - gorgeous Keanu is whoever you want him to be. The man projects the mysterious blankness normally reserved for A-list actresses, becoming a human canvas on which we can project our fantasies. He's testosterone's answer to the ingenue.

Indeed, Hollywood's rules of attraction can be a little bizarre. Generally speaking, the leading man is fully developed while his female counterpart serves as beautiful accessory. Men want her; women want to be her. She may scamper about being "quirky" and getting her Manolo Blahniks caught in sewers, a feat so famously accomplished by J. Lo in The Wedding Planner. She may blink behind smart-girl glasses and sigh in wistful wait for a man to sweep her off her feet, as per Julia Roberts - henceforth to be known as J. Ro. - in America's Sweethearts. She may giggle profusely, jump into a convertible, and abscond to far-off karaoke bars frequented by undesirables, a la Britney Spears in Crossroads. She may pull an Anabella Sciorra in Mr. Wonderful and divorce working-class hubby Matt Dillon (another flawless specimen) only to realize that first love is all there is. In extreme cases, she may even die, collapsing repeatedly before succumbing to tragic illness, as did the frail Charlize Theron in Sweet November.

Charlize got to make out with Keanu, so her motivations may have been somewhat unique. But as for the rest of the lot, these actresses have beauty, they have brains, they have power. As evidenced by public fascination with their real-life romances - and ensuing scandals - these women are far more complex than their on-screen personas would have us believe. So why perpetuate romantic mythology? Because the sweet sentimentality with which viewers and actors alike identify with said romance proves old habits die hard - and old clichés fit smoothly into prose.

We've heard the criticisms of Hollywood romance a billion times and then some: the unrealistic knight-in-shining armour myth encourages passivity, they say, and doesn't prepare people for the reality of romance. True that. But this rhetoric has become as tiresome as the clichés! Pre-stereotype classics like Room With A View are perfectly charming, and the romantic myths we criticize are, more often than not, the fodder of our secret fantasises. To look into someone's eyes and know that you've known him forever is a timeless human experience that transcends our attempts to interpret it. Yet the appeal of nostalgia should not be underestimated, particularly during this post-everything age of jaded confusion. There's something comforting about tradition, a sense of hope and reassurance that accompanies tear-jerking tales of romance, Hollywood style. Although I generally frown upon third-act introductions of fatal diseases, I cried like a schoolgirl at the end of Sweet November, perversely enjoying every tear.
Blame it on Keanu.

OH!!!! I LOVE THAT MOVIE!!!! SWEET NOVEMBER!!!! I am a huge fan of Charlize Theron and she done a beautiful job in that movie as Sarah...she is a beautiful and classy actress.

why does everyone say he's "blank"??? i prefer to think of it as zen.

Posted by: Lori on January 26, 2003 10:31 AM
What's on your mind?.....
(new here? please read this before commenting)
Remember, this is a fan site.
Keanu Reeves is in no way connnected to this website.
Please do not make a comment thinking he will read it.
Comments are for discussion with other fans.
Thank you.