Could this be the big news? 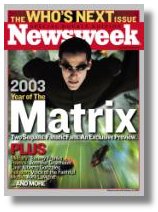 It's not on stands yet, (or it wasn't at the Borders I went to) but I might have a type-up for you later.

You will please to be noting that I SO CALLED the "year of the Matrix" thing on the calendar page.
I almost put it on the actual calendar but it was getting too gaudy as it was.

Whoa, I have periodical precognition.

UPDATE: Rhonda and Keanuette rock for sending me this link:

The Matrix Makers
One year, two sequels and a revolution in moviemaking. An exclusive look behind the scenes of 2003's hottest flicks. (click to read story)

I'll try, but it'll be in January as there's no way in hell I'm going to a post office next week.
You can't get Newsweek in London?

Not to be a stickler for details or anything, but I don't think that is Keanu as neo on the front. The famous widow's peak seems to be askew, and what is it with the chin? Bad lighting, or really really bad lighting? Either way -- yuk!

year of the matrix. i hope they just meant the movie, you know?

I'll try to hunt it down krix!

Check out the whole article here:

Krix, you were right, from the Matrix.com:

First, we remain stunned by the level of online interest and support. Within seconds of our posting the riddle, people were trying to solve it. Incredible.

Now, the answer to the riddle is:

A double issue cover story in NEWSWEEK, on stands today.

The article is peppered with spoilers, so be warned. The images, however, speak for themselves. The particular gem is the cover, a VFX shot where Neo is doing the impossible, just under the NEWSWEEK logo.

The article is online at: www.newsweek.com

You want more, you say? Sure (but we're not calling this an update). For those who want a better understanding of how THE MATRIX came into existence, THE 2ND RENAISSANCE is the place to start. This epic anime story tells of the many steps that led to the first war between man and machine. This will be the first episode to be released for THE ANIMATRIX, a collection of Matrix based anime shorts. Be prepared, as this particular history lesson gives visceral insights that are far beyond what is currently known about THE MATRIX. Written by Larry and Andy Wachowski and directed by Mahiro Maeda (BLUE SUBMARINE No. 6).

Coming in February, THE 2ND RENAISSANCE: PART ONE will be the first of THE ANIMATRIX episodes to launch, with more to follow. In fact, there will be new episodes to download right through the months leading to the event we are all waiting for, the May 15th premier of THE MATRIX: RELOADED. While we are not releasing all nine online (as there is a DVD on the way), those we are encoding will be complete and uncut, pulled directly from the digital source files.

THE 2ND RENAISSANCE: PART ONE. Find out how it all began.

We wish everyone a great holiday!

Uh... I do love the idea of two Keanu movies being The Ones of 2003.
Let me just say one thing: I have the feeling this will be a wonderful year for Keanu.
Let's hope I have Krix's abilities... ;)

Thanks for that link, 'ette.

Tyler, get with the program *wink*
The greeting of choice is now "Happy Neo Year!"

Bea, as long as you don't try to touch your nose with your tongue, I'm happy to share my other abilities :)

I probably should have given a REALLY REALLY BIG SPOILER WARNING, uh? Thought about it the second that I hit the post button which was a second too late. Sorry about that all you Matrix virgins. :)

keanu thinks HE misses Neo...dude, is it May yet?

No. I know because I am counting the hours.

Damn I bought this today, but no NEO on the cover!!

The pix inside have come out really bad and I started to read the article, then, I kicked myself...

Posted by: Keanuette on December 27, 2002 05:06 PM
What's on your mind?.....
(new here? please read this before commenting)
Remember, this is a fan site.
Keanu Reeves is in no way connnected to this website.
Please do not make a comment thinking he will read it.
Comments are for discussion with other fans.
Thank you.