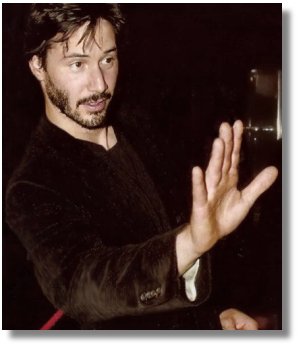 Wowsers, I woke up today and my inboxes were overflowing and all abuzz with news of three, count 'em, THREE movies that Keanu has signed on for in 2003.

(from Yahoo)
Keanu Reeves will fill out a love triangle with Jack Nicholson and Diane Keaton in an untitled comedy that marks one of three films he will shoot next year. Reeves will also star in 'Thumbsucker,' an indie adaptation of the Walter Kirn novel, and then move on to the previously announced 'Constantine,' the adaptation of the DC-Vertigo comic 'Hellblazer' at Warner Bros.

So, are we sure now that the Constantine is the Hellblazer story? Freaking Variety got me all confused last week. I hope that they were just wrong and that Keanu is going to play that right bastard, John Constantine, and not the religious historical figure. Because you know we're going to have dirty thoughts about him, and that's a little icky.

I don't have much to say about the Thumbsucker one, but I just ordered the book it's based on. According to IMDB, Elijah Wood is cast as the lead, so we can kiss our oral fixated Keanu fantasy goodbye. It's an indie so it's bound to be my favorite of the three. I know I'll like it more than the untitled Nicholson/Keaton film. I'm not a big romantic comedy fan. I know that lots of fans are and are extremely excited about it, though. It's the older woman thing. I'm happy he's getting to work with Jack.

And there's some matrix stuff over at Film Force, too. Mostly about the philosophy section at the official site and the soundtrack.

Yippee! AND hardball comes out on video in my country tomorrow! If I would be Swiss, I would be yodeling! Thumb sucking sounds interesting (mommy!) but that does get your teeth crooked... Maybe he'll need a dental appointment as well? Hope it won't be too painful for you...

Looks like tons of screen time for Mr. Reeves beginning next May & straight through 2004! Personally, I'll be thrilled to see him in scrubs! And, um, I have absolutely NO objection to him falling for an older woman! ;-)

I just read the editorial review of the book, "Thumbsucker" over at amazon. I'm thinking he'll play either the hippie therapist that hypnotizes the kid or maybe the dad. I'm hoping it's the former. This looks like a fun story, I can't wait to read the book.

You'll have to let us know about the book, krix....I may have to read it myself. I'm with you in hoping he plays the hippie therapist....I can see it now!

Darn! I thought that HE was the one sucking thumbs! I was just starting to have such nice thoughts about that... Boohoo!

This is such great news. I can't wait to see his new flicks. Thanks for the info.

Dr. Reeves, uh? Can I be the first to open my mouth and say "AHHHHH"

I think playing doctor with Keanu would be fun.

i've been keanu-surfing, and have found sites that i am totally dedicated to. this site is just TOO COOL, and i am definitely adding it to my faves and re-visiting often.....oh, and about the dreams of keanu,......i'll just say that sex with the hubby has DEFINITELY improved, i just have to concentrate on not moaning 'keanu'... :)pleasant dreams. :)

oh, and as far as movie news goes.....i can't wait until they release the filming locations for his new flicks. **willing to travel**

this is my first visit here and i have to say (you know what's coming hehe)... whoa. Keanu is an awesome talent and it's good to know he's so appreciated!! :) i've added you to my list of reads and thanks for having such a great site!! :)

there is no spoon.

Hi Angel and Alex!
Thank you and welcome!

Posted by: krix on December 3, 2002 05:43 PM
What's on your mind?.....
(new here? please read this before commenting)
Remember, this is a fan site.
Keanu Reeves is in no way connnected to this website.
Please do not make a comment thinking he will read it.
Comments are for discussion with other fans.
Thank you.