Thanks to C.C. for the info that over at DarkHorizons.com there's a little blurb about the possibility of a Bill and Ted 3.


"Bill & Ted 3: Apparently Keanu Reeves indicated to Michael Parkinson that he's interested in doing another comedy in the series with him and Alex Winter playing their characters aged in their 40's."

We've heard murmurings about this before. I personally would LOVE to see this movie made. I've even come up with a few ideas... 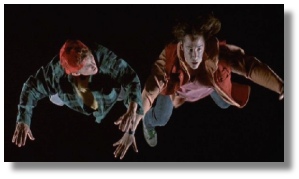 Bill and Ted's Bodacious Mid-life Crisis
The two great ones find themselves stranded in Vegas after a messy dual divorce from the historical babes. They use the time-travel booth to cheat and win big at Caesar's Palace. This gets them in trouble with the mob and they have to go back in time to get the Real Julius Caesar to help them out. Hilarity ensues.
(Alternate title-Bill and Ted 3: Dude, Where's my Hair?)

Bill and Ted's Righteous Gift to Humanity
Bill and Ted go back in time to Save Kurt Cobain's life and prevent Britney Spears from ever being born.
In an uproarious sub-plot, Rufus accidentally convinces the Beastie Boys that he's the Dalai Lama. Hilarity ensues.

Bill and Ted's Grievous Error in Judgment
Bill and Ted abandon rock and roll in favor of emo and are never heard from again.

dammit, krix, they've both still GOT all their hair... how 'bout Dude, Where's My Star? where they travel (with Julius Ceasar) to outer space to escape the vegas mob? And of course they'll have to *shoot* it in vegas, and krix will be an extra, the one who gets to serve cocktails to that bodacious boy Ted...ahem.

Another space one; After turning our earth into a most excellent planet, the two great ones venture out into space, where they attempt to free a human-like race of aliens from a 'Rufusesque' kind of creature. However, this being a secret mission, they must first 'infiltrate' this group of aliens, who are just like us... Except for one thing... They are totally unfamiliar with the concept of 'clothing'. In other words, they must 'uncover' in order to go 'undercover'!!! Cue; Lot's of... Well...
I'm sorry. Maybe I AM a perv. Krix, you must have infected me! Thanks for that! :-) And also thanks for making me smile almost every day! I discovered your lovely vision about 2 months ago, and have been addicted since... I LOVE YOU! XXX Julie

Hi Julie, I like the way you think!
Thanks and I love you too!

whatever do you mean, Nat? OF COURSE there should be more Bill and Ted movies. they are the great ones, most excellent in every way. besides, what i wouldn't give to hear more *middle-aged* Bill-and-Tedspeak. woohoo!

Lori, I meant that the critics will eat Keanu alive!!
it's not enough that he's still strugling with the image of Ted,with the assholes(the press) calling him wooden and air headed,it seems to me that it's a risk to take.
just my two cents here.
of course i'll go and watch the movie..HELLO..Keanu will star in it!!

fuck the critics, bring on the ted! ;)

yeah i guess you right!

Sometimes the funny just falls in my lap. My muse was most bodacious on this day.

Posted by: krix on December 30, 2002 11:04 PM
What's on your mind?.....
(new here? please read this before commenting)
Remember, this is a fan site.
Keanu Reeves is in no way connnected to this website.
Please do not make a comment thinking he will read it.
Comments are for discussion with other fans.
Thank you.