I'm wicky-wick-wicked bored today, so I decided to run a google search of the two things on my mind: Keanu and lunch. 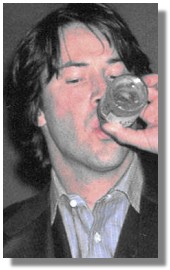 In the results, I found some fanfiction (which I won't even link to because I hate the stuff), a fun fangirl story, and a couple things that had nothing to do with my our Keanu.

A little girl's story of what she did over Xmas holiday included this paragraph:


"When Sarah and the others came we had a lolly fight. I threw one in the air and JP caught it. I threw five up in the air and then Keanu got them and then stole one out of my hand. Then JP screamed "give it back!" Then Keanu ran away. I whispered to JP just say please. Then JP said "can I have my lolly back please!". Keanu gave it back."

Then there's "Keanu"s livejournal (which is NOT REAL, look at the disclaimer people).
This pretty much falls in the same category as fanfiction for me. And whoever is writing it really makes him sound like an ass.
There was one funny portion...

"She came over to my house with her rented Viper. I'm sitting in the car, trying to figure out what we were listening to. Then I just wanted to swallow my tongue. She had Ludacris on full blast. "Roll out, roll out, I got me and so much money, me and my homies, so drop that. Roll out, roll out." I wanted to piss myself laughing. My face probably turned blue. Then she turns around to me and asked, "How do you like the rims? Don't they bling?" That was the point where I debated on throwing myself from the car."

I also found this article, "Yearning for Keanu", from the set of Feeling Minnesota. It has, among other things, the reporter's impression of watching the scene by the pool rehearsed (yeah, you know what one I'm talking about) and a little chat with Vincent D'Onofrio and Courtney Love.
Go read it.

Now if you'll excuse me, I'm going to try and figure out who delivers ice water.

Damn, that 'Yearning for keanu' has been a favorite article of mine for a long while (maybe 'cause FM is my favorite non-Matrix keanumovie). Just...damn!

Also, I'm so f*ing impressed with you (once again), krix! Hate fanfiction? A woman after my own heart. HATE IT, will NOT read it, the stuff REALLY bothers me in all kinds of ways. Nuff said...

The sad thing is, I was actually trolled into writing some once. The old "I bet you couldn't blah blah..." ploy. USENET bastards.

We all have our weak moments. ; ) _I_ was actually sucked into reading some once (can't remember where I found it; the story line involved Mr. Reeves and hockey -- it was VERY well written), even enjoyed it. But after I finished it I suddenly felt absolutely *ashamed* for having indulged. Bad Lori! No, no! Don't invade his privacy like that...

I've tried fan fic for different people/genres...I don't much care for it, either. I've never read one through. Fantasy is fun, but there's a line for me, I think. Real life is so much cooler. lol

Good thing you corrected yourself, missy! It's our Keanu. At least, until one of us snag him. :)

Posted by: Beatrice on August 9, 2002 08:02 PM
What's on your mind?.....
(new here? please read this before commenting)
Remember, this is a fan site.
Keanu Reeves is in no way connnected to this website.
Please do not make a comment thinking he will read it.
Comments are for discussion with other fans.
Thank you.