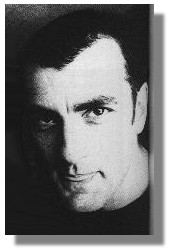 I recently realized that while I've blogged my love for Bret Domrose, I haven't really paid much attention to Rob Mailhouse.

Well, aside from being Dogstar's drummer, Rob is also an actor. He's done a number of feature films and lots of television work. I only found out recently that he guest-starred on an episode of the canceled FOX show, The Tick. Damn! I knew I should have watched that show!
Anyway, Keanu fans will spot Rob in Speed, where he utters "Jesus, Bob. What button did you push?" in the elevator. He most recently appeared in the new Goldfinger video, Open Your Eyes. Which I haven't seen because I'm poor white trash with no cable. Has anyone seen this? I'd like to hear about it.

Anyway, the story goes that Keanu met Rob in a store or something. Rob was wearing a hockey jersey and they struck up a conversation. Acting, music, hockey, blah blah malebondingcakes. A few garage jams and the beginning of what would become Dogstar ...um, began.

I joke about one day having the hyphenated last name of Domrose-Reeves, and that I'll have a kinky and torrid affair with Mr. Mailhouse in between marriages. Rob has always struck me as a very fun and funny guy. He certainly is a nice guy. Tall dark and handsome, too. A few of us affectionately refer to him as "Da Tree" and joke about being members of the Robert Mailhouse Arbor Day Society, because we so want to climb him.

Because he's always stuck behind that damned drum-kit, good shots of Mr. Mailhouse aren't as plentiful as the other two-thirds of the band. Someone needs to get a stage pass and rectify that next show. I can offer you a little audio sample of the wonder of Dogstar's drummer, though.

Thanks to Lori of Dogstarfans for that.

For more about Rob, you can check out Millie's Rob Mailhouse site.

I wouldn't mind climbing him either, if I do say so myself. :) Thanks Krix.. From what I hear, I hear he is really a sweetheart. sighs.

Ps.. I think he's also hidden too much and not enough photo opps for us fans. unfortunately. I'll volunteer myself to get a stage pass if possible.. and get a few thousand pics how's that sound? would be my pleasure.
Now if it became a reality.. that sure would be nice :)

Hurrah for Mr. Mailhouse! I'd "comfort" him anyday.

Hi - glad to be back. I have been unable to access your site for the longest time.
I'm in now but still getting problems (style sheet didn't show without several refreshes). No idea why that might be. Might just be a UK problem. Anyone else out there from UK - had similar probs?
Anyhow good to be back!

IS THIS TOUNGUE, HOLY SHIT, HOW HAVE I NOT SEEN THIS PIC BEFORE...ahem, sorry to yell, but DAYEM!!

Love Rob Mailhouse and thanks for the mention of my website! I've not been online in awhile, but hope to do more with his website soon.


Posted by: MIllie on September 8, 2002 09:16 AM
What's on your mind?.....
(new here? please read this before commenting)
Remember, this is a fan site.
Keanu Reeves is in no way connnected to this website.
Please do not make a comment thinking he will read it.
Comments are for discussion with other fans.
Thank you.