And oh, so far away
I fell in love with you
Before the second show... 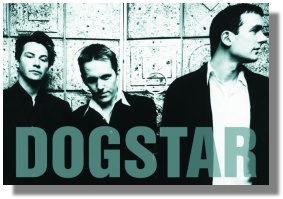 I'll never forget my first show. November 2000, right here in Vegas. Happy Ending* tour. I was lucky enough to get good seats for 2 friends and myself. Great ones, right in front of the bass player. I was afraid he'd catch me looking at him. It's hard not to, though. It's hard to say if the vibrations were from the low frequencies of the monitors or just his presence. What ever it was, it the feeling was almost sexual. The way he bounced that bass off of himself. His hands may as well have been on my hips, the way he moved me. I needed a cigarette afterward.

Live music is almost always better than recorded. That's true with any band, I think. It's the experience. Dogstar puts on a great show. No flash, just rock. Bret is one of the better frontmen I've ever seen. Just enough banter. Casual. He makes you feel at ease. Like you're among friends...everybody having a good time. Even though half the audience is pretty much in heat and about one raised eyebrow away from a catfight.
Not us of course...those other bitches.

Don't you remember you told me you loved me baby
You said you'd be coming back this way again baby
Baby, baby, baby, baby, oh, baby
I love you, I really do

When Happy Ending came out, Ultimatum Records' "street team" contacted a lot of Keanu sites to help promote the release. I was invited to go to a "meet and greet" at the Key Club show in LA. The car I had at the time wouldn't make it to LA, neither would my budget, so I had to miss out. I remember saying that "They'll just have to come to me." Shortly after that the Vegas show was announced. I took it as further proof that yes, indeed....the universe does revolve around me.
On a Dogstar axis.
My moods also control the weather.

It's nearly a year since the last shows. Still no word on new dates anywhere here in the states. I can only hope that these guys are as eager to get together and play again as we are to hear them. Maybe there will be a couple gigs in LA this fall, maybe they will even get to Vegas before the end of the year. Maybe I'll discover diamonds in my backyard and fly to Japan.

They played Superstar at that first show I went to. And a few other times I've seen them. It's not one of my favorites on the CD, but it takes on a new dimension when played live. Sometimes they throw a nice little jam in the middle. It's sultrier, grooooovier live.

Here's a short clip of the live version, so you can see what I mean.

Thank you to Lori of DogstarFans for capturing it from a webcast.

So, like so many others, I do my best to wait for a possible new CD (HEY! you guys got cover art yet???), and hopefully some tour dates.
I know it will happen (you know, universe~revolve~me) So it's just a matter of WHEN.

Don't you remember you told me you loved me baby
You said you'd be coming back this way again baby
Baby, baby, baby, baby, oh, baby
I love you, I really do

*Happy Ending is getting harder and harder to find. I wish I hadn't given my second copy away to Roi.
You can still get it at cdnow.com, though.

Awww. I LOVE Superstar. It is definately my favourite track off H.E...

It's all good though babee...

Gotta show me how to do that stuff....

You can make MP3s from a CDs with lots of programs out there. The ones I use are called CD master (for converting to wav) and Mod Tracker (for wav>mp3. The first one I got from a shareware site. And the Mod one was on some sound studio sampler CD that Roi loaned me. I also use a program called 'cool edit' to edit the wav clips.
As far as actually capuring audio, I have no idea how to do that. I'm sure that it's all about the software, though

I made a nine-hour drive today, and along the way somewhere I got to thinking -- exactly one year ago today I saw the Dogstar boys for the last time. I remember flying home from Vegas already feeling depressed, having seen them three times in 33 days, knowing it could be a L-O-N-G time before I saw them again. Now, a year later, I'm DYIN' here!! Just going out back to dig for diamonds...

I had fun writing this post. Trying to blend the lyrics with the writing in between. I could hear the song as I wrote. I don't know if the whole thing translated well. But I like it.

Posted by: Keanuette on January 1, 2003 05:39 AM
What's on your mind?.....
(new here? please read this before commenting)
Remember, this is a fan site.
Keanu Reeves is in no way connnected to this website.
Please do not make a comment thinking he will read it.
Comments are for discussion with other fans.
Thank you.