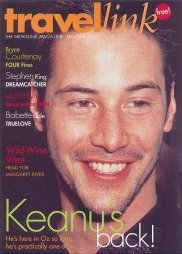 Big lemur snuggles to Kaz, for scanning and sending me an article from the Australian magazine TravelLink.
Here's a few quotes from the article:


"I enjoy a good suit, I have a nice car, I like a nice Bordeaux but I haven't bought any shrines" -on what he does with his money

"I got to perform some Shakespeare and it felt like a kind of epiphany, or something that I wanted to do more of.
So I pursued that and that same feeling of playing and investigation still exists today, except now I've matured and gotten older so a lot of my sensibilities and feelings about life have developed alongside with that original impulse to play." -on discovering acting when he was young

"I had a great time there and the people were extraordinary - although occasionally I'd read somewhere which store I'd been into and which book I had bought and that was a bit alarming when you think you're anonymous."-on Sydney

"I look at it like I'm marrying The Matrix and there is just such a true core commitment to creating it and being there every day focusing on realising what the directors want to see." -on filming

"When you see it, it's got the kind of mythical figures that make a great classic; the hero, the wise man, the warriors, the guides, the prophesy, the oracle and the Messiah, but it also has a contemporary experience to it." -on The Matrix trilogy

"For the past few years especially I feel like I've really enjoyed acting more and more by just doing a lot of it and getting more of a sense of my own technique." -on acting

"So whether it's true or not to someone who's watching my work, my own sense has been that I am coming more into my own craft." -more on acting